The Casual Outfit[1] or Swimsuit[2], as named in Miitomo, is an outfit worn by Samus Aran in the best endings for several Metroid games. This article focuses on the consistent outfit featured in Super Metroid, Metroid Fusion and Metroid: Zero Mission, although Samus had also worn the Justin Bailey in Metroid and a tank top and panties in Metroid II: Return of Samus.

Samus's most recognizable Casual Outfit consists of a sports bra and short shorts (a thong in Super Metroid and to a lesser extent Metroid) worn with bracelets and boots. The color varies from game to game: Magenta in the original Metroid black in Super, blue in Fusion, orange in Zero Mission. Each appears in the best endings of each game, and the former two also appear in the Game Overs for their respective games. The Zero Mission top features a triangle cut out above the chest and some lining not shown in previous incarnations, and does not have bracelets.

Samus wears the Casual Outfit only if the game is completed in the shortest amount of time. These time limits have varied from under one hour to under two hours to under three hours, depending on the game. In the original Metroid, each ending sequence but two (the "worst" of them) was notable for revealing that Samus, underneath her Power Suit, is actually a woman. However, for several games after, the Casual Outfit continued to appear as traditional fastest-completion ending sequence attire, even though it was well-established that Samus is female. The persistent showings of Samus in a revealing outfit are likely intended as 'rewards' for beating the games quickly.

The Casual Outfit was largely replaced by the Zero Suit. The Casual Outfit made an appearance in Zero Mission, where it is worn in endings earned by collecting 100% of the items or less than 15% of the items. It, or more specifically the Fusion version, later made a reappearance for the best ending under Fusion Mode of Metroid: Samus Returns.

Samus also wears a Casual Outfit in the ending of Metroid EX, after removing her Power Suit. This version most resembles the outfit from Super Metroid since it involves a sports bra, thong and boots, but she wears cropped gloves and a holster, and her hair is tied at the end.

The Casual Outfits from Fusion and Zero Mission were revealed in a Miiverse post on August 19, 2014 to be included in Super Smash Bros. for Nintendo 3DS and Wii U as alternate costumes for Zero Suit Samus.[3][4] They feature some minor aesthetic changes, namely Samus's now signature ponytail hairstyle, Jet Boots, and bracelets, in order to be more consistent with Zero Suit Samus's design. The costumes were added late into the game's development.[3]

Both Casual Outfits returned in Super Smash Bros. Ultimate. They are occasionally used by Puppet Fighters in Spirit Battles, including Young Samus (representing her Military Dress).

The Casual Outfits in Super Smash Bros. for Wii U

The Casual Outfits in Super Smash Bros. for Nintendo 3DS 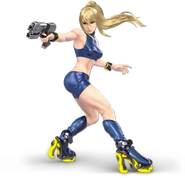 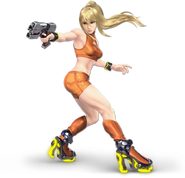 The Zero Mission Casual Outfit appears in this game, where it is alternatively known as Samus's Casual Outfit[1] or Swimsuit Samus[2]. This is the first game to directly name this outfit. There is also a blue variant based on the Fusion Casual Outfit, as well as original white, yellow, green, and black palettes.

Green and blue Casual Outfits
Add a photo to this gallery

Game Over
Add a photo to this gallery

The Fusion Casual Outfit in the Metroid manga.

Metroid: Volume 2
Add a photo to this gallery

Retrieved from "https://metroid.fandom.com/wiki/Casual_Outfit?oldid=277137"
Community content is available under CC-BY-SA unless otherwise noted.