Wikitroid
Register
Don't have an account?
Sign In
Advertisement
in: Pages in need of images, Articles to be expanded, Rooms,
and 3 more

For other uses, see Catacombs (Disambiguation).

The Catacombs is a room in the Torvus Bog. It appears in Metroid Prime 2: Echoes.

The Catacombs is a half-submerged room containing many Torvus Bearerpods, G-Sch's body and a portal to the Dungeon. The portal is blocked off, and a Bomb Slot must be activated to reach it. The bomb slot cannot be reached without the Gravity Boost.

Worthy of note is that the Catacombs’ walls are lined with hollow, shelf-like structures, each with three long, indistinct brown shapes nestled inside. These can also be seen in the Gathering Hall, where Samus can extend them for use as platforms. Though their intended purpose is never explicitly stated in-game, their internal data refers to them as “coffins” - implying that these “platforms” are in fact the crypts that give the Catacombs its name, and their contents are actually Luminoth bodies.

2 Grenchlers
"Morphology: Grenchler
Water-based reptillian predator.
Well armored and deadly at any range. Its back shell is vulnerable to explosive blasts, however."

Luminoth Lore (The New Terror) (Gamecube version only)
In time, the Ing began to possess Luminoth as well as the creatures. Friends and family members became the enemy, spilling Luminoth blood across the land. Desperate, we devised shielding to prevent Ing possession. It was effective, but not perfect. Should the shielding fail, all Luminoth were prepared to self-terminate rather than become a weapon for the Ing."

Luminoth Lore (Recovering Energy) (Trilogy version only)
"We were not prepared to fight a long war. The forces of the enemy outnumbered ours vastly. We sought a way to end the war quickly, without extended combat. We decided to build a device to recover our lost planetary energy from Dark Aether. Without this energy, the dark world would cease to be, and our world would be restored to stability."

Luminoth Lore (G-Sch's Testament)
"What craven savages are the Ing! Trapped in the catacombs with no chance of rescue, I fought them to the last. I watched them feed upon their dead. I heard them pressing the lesser of their number into the front ranks, that my blasts would take them. At least their leader stood against me in battle. He was a foe worthy of a Luminoth warrior." 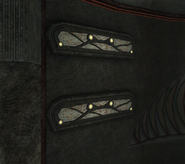 The crypts in the Catacombs' walls.

Samus jumping into the water.

The Portal.
Community content is available under CC-BY-SA unless otherwise noted.
Advertisement