Cavern Alpha is a room located on Phaaze in Metroid Prime 3: Corruption.

Phazon tendrils are placed at the entrance to this room, blocking Samus' path. She must navigate underneath them in Morph Ball to avoid them from catching her. To get to the top of this room Samus must climb several ledges to reach the top of the room.

Phazon crystals
"Cluster of large crystals has grown through the cavern wall. Vulnerable to explosive blasts."

The Phazon tendrils in the entrance.

The main area of the room. 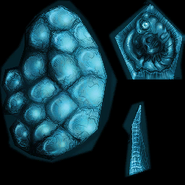 Texture in the game's files for an embryonic creature that can be seen in semi-transparent protrusions in this room. 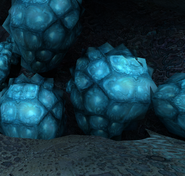 Closer view of the eggsac-like structures containing the embryos. They appear identical to the eggsacs seen on Hoppers.
Add a photo to this gallery
Retrieved from "https://metroid.fandom.com/wiki/Cavern_Alpha?oldid=269587"
Community content is available under CC-BY-SA unless otherwise noted.