Ceres Space Colony (スペースコロニー Supēsu Koronī), also known as Ceres Station, is the first area in Super Metroid, and the site of the Metroid Theft Incident. After taking the baby aboard her Starship, Samus Aran brings it to the Space Science Academy Lab on Ceres for research. Shortly after she leaves, Ceres' distress signal activates and she returns to the colony to find it dark and all of the colony members dead. She progresses through the colony and meets Ridley, holding the baby in his talons. Samus and Ridley battle, but the Pirate flees and activates a Self-Destruct System. Samus escapes and Ceres explodes shortly afterwards. She then follows Ridley to Zebes, which she tears apart in search of the Baby. 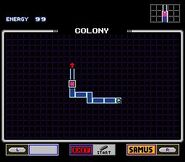