Chest plates are protective armor used by multiple bosses and other entities in the Metroid series.

As part of his cybernetic enhancements, Meta Ridley is given a mechanical chest plate. It guards a severe wound in his chest, likely a result of Ridley's defeat during Samus's Zero Mission. This serves as his weak point during the battle with him in Metroid Prime and Metroid Prime 3: Corruption, and Samus exploits it to defeat him. It is rather thin and weak in Prime, and Ridley protects it by shielding it with his arm or staying in a crouched position. Sufficient damage to his mouth will stun him long enough for Samus to attack his chest.

In Corruption, Meta Ridley does not use a chest plate, and Samus can freely attack his chest. As Omega Ridley, he receives a stronger chest plate, made of Phazite. It is referred to as "protective armored plating" in Omega Ridley's Logbook entry. Samus can still destroy it using her Nova Beam when Omega Ridley is stunned. He will regenerate it twice, before he stops trying to protect his wound and instead goes on the defensive.

It should be noted that the correct term for this armor would be chitin, and not chiton. However, the only source that names this armor uses the latter term.

Samus can destroy the chiton armor gradually with Missiles, Super Missiles and Ice Beam shots, and can destroy it instantly with a Power Bomb. When the armor is destroyed, the Omega Metroid recoils back twice, and the exploding armor releases Missile and Super Missile Ammo, and Energy Capsules. After the armor is removed, the Omega will attempt to lunge at Samus, opening itself up to a Melee Counter followed by a Grab Sequence where Samus can inflict damage to the membrane. After the Grab Sequence is over, the Omega Metroid will regenerate its armor, although the chiton will be visually thinner and cover less surface area than before. After it is broken a second time, the armor will not regenerate, leaving the membrane exposed for the remainder of the battle.

Chiton armor, or at least a similar predecessor ribcage covering its membrane, can be seen on the Omega Metroid's original design in Return of Samus and especially Metroid Fusion. However, unlike in Samus Returns, this early chiton armor is completely aesthetic and does not protect the Omega Metroid in gameplay.

Queen Metroids also appear to possess chiton armor, although it does not fully protect the Queen Metroid's membrane from attacks, as seen in Metroid: Other M. The Queen makes up for this weakness by always standing in a quadrupedal position, making it impossible to target the membrane. In Return of Samus and Samus Returns, Samus can attack the Queen's membrane from the inside if she allows herself to be swallowed. The only reason Samus can shoot the second Queen Metroid in its membrane is because it was flipped on its side after the BOTTLE SHIP's emergency brakes were engaged. The Wave and Plasma Beam are able to penetrate the weak armor.

Samus Aran's Power Suits contain a signature, usually red chest plate, although this plate has no extra utility beyond protecting her body. The thrusters of her Power Suit are attached to the chest plate. There are two lights on this chest plate, which will sometimes flare. It has a basic design, with the most radical change to it coming from the Light Suit, which replaces the usual design with a quartet of circles that glow when in Dark Aether. It is possible that they are a power source for the rest of the suit, providing Samus immunity from the toxic atmosphere.

The PED Suit's Auto Vent is used by pressing a button on its chest plate, which Samus uses after landing on Phaaze to avert a Phazon Overload. Samus also presses a button on her chest plate in the Special Ending of Metroid Prime 3: Corruption to remove her Varia Suit. Dark Samus, the SA-X and other doppelgangers of Samus use warped or identical versions of her chest plate.

The Ancient Chozo Robot in the Metroid 1.5 design document was outfitted with a chest plate, which multiplayer contestants would enter and use to control the robot.

Omega Metroid (p. 22)
"Evolution has also done away with the Metroid's trademark weak point: the core. While the core is still there, the Omega's chiton armor plating hides it deep in its chest. The only way to reach it is to force your way in with explosive attacks, but even then, you have a short amount of time to strike before the chiton self-repairs and covers the core once more."

The Omega Metroid with its fully-formed chiton armor. 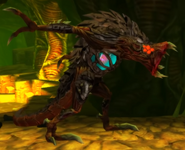 The regenerated chiton armor, which is noticeably thinner than the fully-formed armor

An Omega Metroid dies after its chiton armor has been shattered and its core damaged enough.

Samus uses the Auto Vent of her PED Suit, attached to its chest plate.
Add a photo to this gallery
Retrieved from "https://metroid.fandom.com/wiki/Chest_plate?oldid=269341"
Community content is available under CC-BY-SA unless otherwise noted.