Wikitroid
Register
Don't have an account?
Sign In
Advertisement
in: Articles with non-canonical information, Humans, Characters,
and 8 more
English

Chief Hardy is the chief of the Federation Police. He is first depicted in the Super Metroid comic and was later adapted in the Metroid manga.

In Metroid: Volume 1, Chief Hardy is introduced on Jigrad following Samus's actions in destroying the Space Pirates there. He chews her, Mauk and Kreatz out for disobeying their orders. However, his tirade is cut off when Commander Adam Malkovich appears to survey the trouble and question the Pirate leader, P-1.

In Metroid: Volume 2, he introduces the story of the Metroid to Samus, and is surprised that she is able to name the yet-unnamed creature.

Under his leadership, the Federation Police force dropped its guard down around Zebes, allowing the Space Pirates to rebuild their stronghold. His superior is Chairman Keaton, who brings Chief Hardy on a mission to Zebes. At the end of the comic series, he is the one who kills the baby with his laser gun, as he mistook it for a normal Metroid.

In his original portrayal in the Super Metroid comic, Chief Hardy is lazy and usually spending more time eating than working, causing Chairman Keaton to look down upon him as incompetent. In comparison, the Monthly Magazine Z manga version of Chief Hardy is a bit less lazy, but still not all too bright. 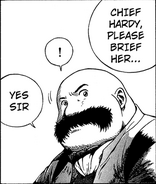 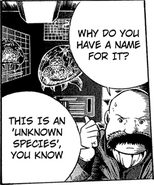