Wikitroid
Register
Don't have an account?
Sign In
Advertisement
in: Pages with sourced titles, Rooms, Area 7,
and 2 more

The Chozo Tower[1] is a room in Metroid II: Return of Samus and Metroid: Samus Returns.

The Chozo Tower is located in Area 7 of SR388, and is explored during Samus Aran's mission to exterminate the Metroids. This room marks the entrance to the Omega Metroid territory, emphasized by a brand-new music track that starts playing in this room: a dark and sinister theme in Return of Samus, or Chozo Laboratory in Samus Returns.

In Return of Samus, the Chozo Tower does not have any particularly interesting features, apart from a Save Station and a shallow pool of unidentified liquid at the bottom. It is a fairly standard, if unusually long, vertical shaft composed of the same rock seen throughout much of the area. It is completely uninhabited, and there are no items to be found here.

In Samus Returns, the Chozo Tower is completely overhauled, although it remains a very tall room. Along with the rest of Area 7, it is redesigned as an ice-covered Chozo laboratory. Ornate statues, detailed holograms, large fans, and green containers (seen also in the Chozo Memories) decorate the background of the Chozo Tower. Long after the end of the Chozo's SR388 civilization, the tower is now only populated by the remaining Chozo security system. Many robot sentries and turrets guard the room, keeping out all living creatures. However, some red plants have taken root in narrow spiked passages.

In addition to a Save Station (now moved to a different part of the room), a Teleport Station and Energy Recharge Station have been added to the Chozo Tower. Rather than simply climbing a straight shaft with many platforms, Samus must zigzag left and right as she ascends the room, using the Screw Attack and Bombs to break through floors and ceilings along the way. There are multiple optional side paths, including one leading to a Power Bomb Tank.

Power Bomb Tank
In Samus Returns, Samus must execute a series of Spider Boosts to launch herself through narrow passages lined with spikes and red plants.

WALKTHROUGH (pg. 178)
"This next room is what we're terming the "Chozo Tower." Is it full of Chozo? No. But it's filled to bursting with Chozo security machines and is a difficult place to climb without taking a significant amount of damage - or knowing a clever shortcut." 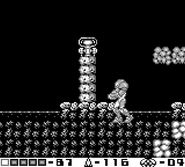 The Save Point in Return of Samus 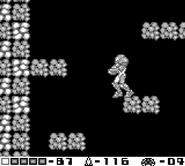 Samus ascending the Chozo Tower in Return of Samus 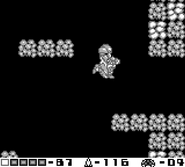 The top exit in Return of Samus

The Teleport Station in Samus Returns

Icicles and a green capsule in Samus Returns