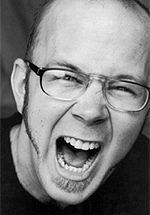 Christopher Sabat is an American voice actor, notable for his work in animes such as Dragon Ball Z and Tsubasa: Reservoir Chronicle. Born 22nd April 1973, Washington, District of Columbia, USA. In Metroid Prime 3: Corruption, Sabat provides the voice of Rundas, as well as additional voices. Out of Corruption, he provided the voice of Vegeta in the Dragon Ball franchise, All Might in My Hero Academia and Garland in Dissidia: Final Fantasy.

Sabat is usually cast in roles which involves him playing a very strong man or very gruff, tough, grouchy characters.

Retrieved from "https://metroid.fandom.com/wiki/Christopher_Sabat?oldid=235020"
Community content is available under CC-BY-SA unless otherwise noted.