The Combat Visor is Samus Aran's basic Visor in the Metroid Prime series, and gives her the basic feedback she needs to survive. It monitors her energy levels, all ammunition remaining, danger levels, and gives her feedback from the environment to pinpoint any anomalies to send her in the right direction. When enemies appear, they are surrounded by a reticle However, the Combat Visor only sees things in this dimension; therefore objects outside the visible spectrum or interdimensional objects cannot be seen. Other visors must be applied in those situations.

In the trailer within the Metroid Prime 2: Echoes Bonus Disc, it is revealed that Federation Marines use "Combat Visors" as well.

In Metroid: Other M, Samus has the ability to use first-person and third-person. This brings back the use of the Combat Visor. The Combat Visor is drastically changed. Her energy level is no longer found at the top center of the screen. Instead, it is at the top left corner, with an Energy Tank bar found underneath it, having a limit of nine Energy Tanks. Beneath this is a Charge Meter which was also featured in the previous Prime games. Beside the energy levels is a Missile ammunition counter.

Locking onto a boss will cause a separate health bar to appear in the top right-hand side of the screen, showing the boss's health.

The lock-on system is also featured; however, the 'current visor' or 'current beam' and also the radar and danger level features are not available.

After many of the cutscenes in Other M, Samus' visor turns from transparent to opaque. Considering battle sequences happen after many of these cutscenes, this could be Samus activating her Combat Visor.

The Combat Visor makes a brief cameo during the cutscene of the baby's hatching and imprinting onto Samus in Metroid: Samus Returns. As Samus is observing the docile infant, the camera briefly shifts to a first-person view the newborn with Samus charging an Ice Beam blast to be ready. It then shifts back to the 3rd person perspective, and Samus diffuses the shot, sparing the baby.

In Fusion Mode, Samus's Arm Cannon and hand are changed during the cutscene to match the Gravity Fusion Suit design.

Although not used in gameplay, the Combat Visor is shown in various cutscenes. In the beginning of the game, shortly after the flashback of her encounter Raven Beak, Samus looks at her left hand. The Combat Visor is also briefly shown when Samus encounters E.M.M.I.-01P, when Samus is Sliding under Corpius before the battle with it, and when Samus recovers from a projectile fired at her by E.M.M.I.-06WB in their first encounter.

to select the Combat Visor. 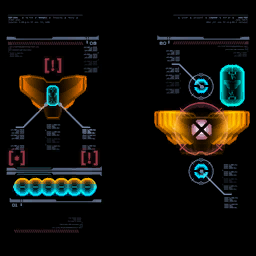 The Combat Visor is your default visor. It provides you with a Heads-Up Display (HUD) containing radar, minimap, lock-on reticules, energy gauge, and Missile count.

to bring up Visor Select. Move the cursor into the middle zone and release

Your current Missile amounts will be displayed in the lower-right corner of the Combat Visor.

"The Combat Visor is the default visor used in Samus Aran's Heads Up Display. It provides the bounty hunter with radar, a mini-map, lock on-reticules, threat assessment, energy gauge and missile count."

THE COMBAT VISOR – Everything a Bounty Hunter Needs to Know
"The Combat Visor clicks into place whenever Samus uses her Arm Cannon. It contains a HUD (heads-up display) that gives the bounty hunter a wealth of data – including an environmental threat meter, a radar display, lock-on reticules and the remaining amount of Power Suit energy and Missiles. In a cinematic twist, all of the visors in the game reflect real-world conditions: They will frost over in the cold, steam up in hot areas and even collect raindrops if you stare at a gloomy sky for too long.
The environmental threat meter is on the screen's left-hand side. The radar is above the threat gauge. The screen's other side shows a map and a Missile count. On the top and bottom you'll see energy, weapon and visor information.
When an enemy draws near, the Combat Visor will bring up a targeting reticule. If you hold down the L Button, you will lock on to the target. Attacking multiple enemies is a simple matter of holding and releasing the L Button as they approach.
Scanning an enemy does more than show information; it can actually alter an attack strategy. If you don’t scan an enemy, you will lock on to its body. If you scan it and find a weakness, you will automatically lock on to the vulnerable spot.

"Your default visor, through which you can control your vast arsenal of weaponry. Features a targeting reticule for locking on to enemies, a radar, three-dimensional map and threat proximity indicator."

"This default visor is standard for battle and provides Samus with all the general information she needs."

"This default visor is standard for battle, and provides Samus with all the general information she needs."

The Combat Visor in item form in Echoes, viewable in the Inventory. 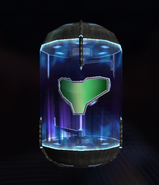 The Combat Visor as it appears in the Metroid Prime 2: Echoes beta.

The Samus Returns cameo in Fusion Mode. Notice how the Arm Cannon and left hand have been changed to those of the Fusion Gravity Suit.

The Combat Visor is glimpsed when Samus slides underneath Corpius.