The Command Visor is a visor in Metroid Prime 3: Corruption that allows Samus to remotely control her Gunship. This control includes having the Gunship leave its location to land at a landing pad where Samus is situated, and maneuvering heavy objects if necessary. Lastly, she can order the ship to do a Bombing Run with Ship Missiles to destroy obstacles and large enemies.

Sylux, a Bounty Hunter from Metroid Prime Hunters, appears to possess a similar ability; he orders his ship, the Delano 7, to attack Samus while he is in a battle with her. They may be common or possibly outlawed, since Rundas had told Samus that using the visor had been authorized while fending off the Pirate attack on Norion.

Although the Command Visor is included at the beginning, Samus is unable to use it as the Visor is offline. However, it changes to online during the attack on Norion; while fending off some Space Pirates en route to Generator A, Rundas helps her. Afterwards, he received word that the Federation authorizes the use of Command Gunships. Therefore, Samus is now capable of using the Gunship command.

In Metroid Prime 3: Corruption, there is a related audio glitch. To perform it, Samus must land the Gunship and walk into it (as if to save), and then quickly switch to the Command Visor just before she enters. This causes the Command Visor's audio to play inside the ship instead of In the Cockpit. The glitch can be fixed by leaving the ship. 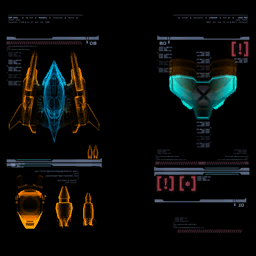 The Command Visor is used to send commands to your gunship.
Push and hold

to bring up Visor Select. Move the cursor into the lower-right zone and release

to enter Command Visor.
When in Command Visor, you will be able to see Command Icons. Target and lock on to these icons with

to send orders to your gunship.

Much like the Varia Suit, your gunship's abilities are expandable. As you gain more abilities, you will be able to use the Command Visor to send your ship new commands.

The Command Visor appears to be used during the ending of Metroid Prime as Samus calls her ship while the Impact Crater is collapsing. She also appears to use it near the end of Metroid: Samus Returns, to activate her Gunship from the top of a cliff. 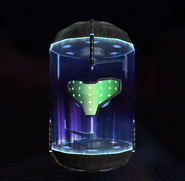