Commando Pirates are a caste of well-trained, armed and armoured Pirate sworn to protect the Pirate Homeworld in Metroid Prime 3: Corruption. They served as the elite guard of the Homeworld, and were overseen in battle by a single Pirate Commander who would lead a Commando Squad.

These Commandos were distinctively different than the Pirate Commandos that Samus Aran encountered on planet Aether. Similar in appearance to their Pirate Trooper brethren, the Commandos had all of their weapons, but wore special armor crafted out of Phazite which could only be pierced by high-frequency beams. These tenacious warriors stood out against the lower-ranked Pirates in their ability to become invisible, as well as their elevated endurance and battle prowess. However, X-Ray Visor systems could be used to target the Pirate's skull through their helmet, allowing a quick penetrating blast to destroy them. Aside from this one weakness, they are extremely resilient to all forms of attacks, save for Phazon-based weapons. On Hypermode, Commandos cause the X-Ray Visor to go static, however the targeting reticle is still enabled despite visual disruption.

The cloaking technology of these Pirates may have been derived from that used by the Shadow Pirates, and is possibly located in their helmet, as they will not cloak themselves once the helmet has been shot off.

Whenever the Pirate Alarm System is activated, the following Pirates will soon be backed up by one or two Commandos, as they uncloak and sometimes roar in the area.

Commando Pirates will sometimes enter Hypermode, which creates interference with X-Ray Visors. This makes it almost impossible to lock on to Pirate Commandos using the Visor and as a result makes it difficult to land head shots with the Nova Beam. However, Samus can lock on to a Commando using the Combat Visor, and switch to the X-Ray Visor (which keeps the lock-on while switching to the headshot view) and fire blindly at the head area in an attempt to do a Headshot.

It is said that Commando Pirates become Pirate Commanders if they withheld the rank for a minimum of ten years.

Upon killing twenty Commando Pirates, a Friend Voucher is awarded. 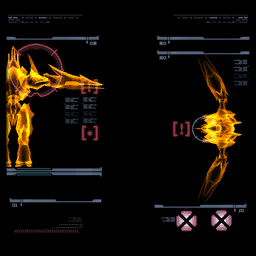 Commando Pirates use the best gear available: only Beams of the highest temperature can penetrate the layer of Phazite in the armorsuit. All of the weaponry is powered by Phazon. Each commando has a combat cloaking field, along with boost thrusters and a personal teleporter. The Phazite armor they wear makes them extremely resistant to damage in combat.

Samus targets a Commando's skull through its helmet using her X-Ray Visor.

Samus engages a Commando after removing its armor - only the helmet remains.

Samus battles a Commando and two Assault Troopers in the Command Courtyard.
Русский
Community content is available under CC-BY-SA unless otherwise noted.
Advertisement