Connection Elevator to Deck Alpha is a room on the Frigate Orpheon in Metroid Prime. The elevator can be activated by scanning an Interface Module; upon completing this, an explosion causes damage to Samus Aran's Power Suit, which causes her Varia Suit, Grapple Beam, Charge Beam and Morph Ball capabilities to malfunction, and she is forced to track down her abilities again later. At the top of the elevator shaft, there is an Auto Defense Turret that can be deactivated via scanning another Interface Module that is found just before it. 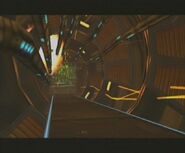 Samus is thrown back from the explosion.

Samus is left with the Power Suit.
Community content is available under CC-BY-SA unless otherwise noted.
Advertisement