The Control Capsule[1][2] is the glass tank in which Mother Brain resides in her appearances in Metroid, Metroid: Zero Mission and Super Metroid. It is always located at the very end of a Zebesian Command Center. It is also heavily implied in various sources that the Control Capsule is the only thing protecting Mother Brain from being devoured by the Metroids at her disposal.

Samus Aran is always required to destroy it with Missiles before she is able to inflict damage to Mother Brain. In Metroid, a single Missile is sufficient to create an opening in the Control Capsule, but Zero Mission and Super Metroid forces Samus to fire numerous Missiles in order to do so. Interestingly, Zero Mission's capsule breaks down entirely as soon as an opening is made, while Super Metroid's falls apart gradually whether Samus is shooting Mother Brain directly or the remaining sections of the glass. The Metroid-based microgame in WarioWare, Inc.: Mega MicroGame$! and WarioWare, Inc.: Mega PartyGame$! still requires only a Missile, but the opening made in the glass will be larger.

In the Metroid manga, Mother Brain says that the Control Capsule is made by molecule transference of Zebetite, and it uses the same system that governs Zebes' Planetary Protection Shield. 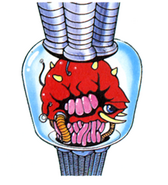 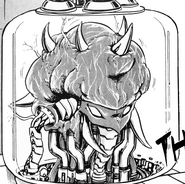 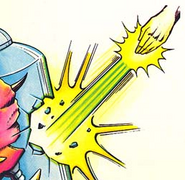 The remains of the original Control Capsule, as seen in Super Metroid. 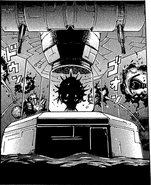 Super Smash Bros. for Wii U
Add a photo to this gallery

Retrieved from "https://metroid.fandom.com/wiki/Control_Capsule?oldid=273107"
Community content is available under CC-BY-SA unless otherwise noted.