First room in Metroid and Zero Mission, and the Metroid series as a whole

Corridor No. 1[2][3], also known as the Starting Point[3][4], is the very first room Samus Aran infiltrates in the region of Brinstar on planet Zebes. It serves as the location where her mission begins in Metroid and its remake, Metroid: Zero Mission. This room is also, notably, the first playable room in the entire Metroid series. Though it is seen again in Super Metroid, it does not serve as the game's first chamber.

Corridor No. 1 consists of blue rock and metal, occasionally featuring Koma. Samus starts off on a platform at the Starting Point, where (in Zero Mission) she opens her eyes and begins her first adventure.

In Metroid and each of Corridor No. 1's appearances, to the left of the Starting Point is the first item in the game, the Morph Ball. Samus must jump over a midair rock formation somewhat resembling a staircase, and she will find the Ball on a pedestal. However, the rock formation is low enough that she cannot walk under it, and tall enough that she cannot jump back over it. Thus, the item immediately comes into use as Samus must use it to roll under the narrow space between the formation and the ground. She must then continue on to the next room, the door to which is on a raised platform. Metroid begins with Samus starting on the platform, slowly appearing on-screen.

Victory Techniques for Metroid depicts Samus crashing into Corridor No. 1 after falling off her Cosmo Liner, but no such event is shown in-game.

In Zero Mission, the layout of Corridor No. 1 is mostly the same as the original Metroid, although some of the terrain has been smoothed over. The background, where once there was none, is now green, and depicts far-off caverns. It no longer contains Skrees as an enemy.

The remake's introduction cutscene demonstrates that Samus first landed on Crateria with her Starship. Despite this, Zero Mission does not show exactly how Samus enters this room, as only her footsteps can be heard when the screen fades to black after landing on the planet's surface. When the screen reappears, she is already at Brinstar's Starting Point. When the Crateria region is fully explored later on, one can easily find the path Samus took to reach the Starting Point at the beginning.

Strangely, despite Brinstar and Crateria being connected by a shaft shaped like an elevator tunnel, no such function is present. Even stranger is the artwork from the instruction manual (image on the top right), which suggests Samus may have used a working elevator from Crateria. However, in order to reach the Starting Point from Crateria in-game, Samus merely needs to fall off from the top of the shaft. To leave Brinstar from the Starting Point, she requires Power Bombs to uncover a Morph Ball launcher hidden under the platform, which launches Samus upwards to Crateria.

In Super Metroid, a working elevator was placed sometime during the events of the Metroid Prime series or SR-388 incident. It takes Samus to the Starting Point from the desolate ruins of the original Tourian, the latter of which are now considered a part of Crateria. The Morph Ball is curiously in the exact same place it was before, but after acquiring it, an Eye mechanism shines a light on Samus.

There is also now a Fake Block under the rock formation. As Samus returns to Crateria, the Koma statues that were stationary in her first adventure become active. Upon returning to Crateria, Samus discovers that the Space Pirates are waiting for her in an ambush. While exploring the jungle section of Brinstar (or returning here with the Power Bomb, Samus will find a Yellow Hatch that leads behind the left wall of Corridor No. 1. She is locked in the room until she kills three Sidehoppers. Using Power Bombs twice will reveal a Power Bomb Tank.

Morph Ball
In all appearances, directly to the left of the location where Samus spawns.

Power Bomb Tank
Super Metroid only, through a wall of Power Bomb Blocks to the left of the Starting Point.

ROUND BALL (page 53)
"As soon as you start, go to the left. Jump up and cross the high walls, then you can get hold of the Maru Mari. This is useful for going through walls or narrow passageways."

POINT 1 (page 58)
"If you get a round ball, then you can go through the narrow passageway easily. Samus becomes round when you press the down button."

A. COLLECT THE MORPHING BALL (page 44)
"The very first thing you should do after landing on Planet Zebes is go to Brinstar and collect the Morphing Ball. Without it, you might as well give it up."

"Bomb through the low part of the bricks in this area to get through."

"A Power Bomb blast will nicely clear away these blocks."

THE MORPHING BALL (page 27)
"Here it is, the morphing ball which is so vital to your mission. To reach it, you've first got to destroy the top block of the barrier by jumping and firing. Once that's done, you need to spin jump through the gap then shoot the pod and get the ball. If you have the bomb, getting out is easy - just blow up the bottom set of rocks to the left, morph and roll out. If you don't yet have the bomb you can still destroy these rocks with your blaster by jumping and firing diagonally down."

This description is inaccurate, as the Morph Ball is not encased in an Item Sphere, and it is not possible to acquire the Bombs before the Morph Ball.

BOMB THE BARRIER (page 27)
"You need to drop a power bomb in order to get through these. Make sure the whole barrier is on screen before detonating the device."

001 morph ball (page 26)
"You won't get far if you go to the right from the start. Run left, climb over the large rock formation and leap to the round upgrade on the tall pedestal. Once you've refitted your suit, you'll be able to roll through small openings: take on the shape of a ball by pressing Down twice on the Control Pad."

281 BEGIN AGAIN (page 91)
"Climb up the rocky shaft, move right and detonate a Power Bomb at the reddish boulders. You'll carve a path to Brinstar - where you started your adventure."

282 INTO KRAID'S LAIR (page 91)
"Venture right from the starting point, drop through the first shaft and take the elevator into Kraid's lair. While you're in the vicinity, you can create a launch-pad shortcut to Crateria by Power-Bombing the blocks where you started the game."

15% Walk-through Step 01 (page 100)
"From the starting point, run left, leap over stair-stepped obstacles and land on the Morph Ball upgrade - you can't go far without it."

Speed Walk-through Step 01 (page 103)
"Run left from the start, jump over obstacles and collect the Morph Ball upgrade, which gives you the ability to roll through tight passages."

001 PUT THE BALL INTO PLAY (page 107)
"If you try to progress to the right of the start point, you'll soon realize that you're too big to fit into the planet's small spaces. Run to the left of the starting area, hop over a rock formation and grab the Round Ball upgrade on the other side. With it, you can roll into a small ball by pressing Down on the Control Pad. Roll under the rock formation and continue."

The Morph Ball in Metroid.

The Morph Ball in Zero Mission.

The Morph Ball in Super Metroid.

Samus lands in the room in Victory Techniques for Metroid. 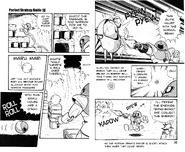 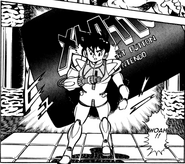 Miitomo wallpaper based on Corridor No. 1.