The "Crateria Chozo Ruins entrance" is a room in Crateria. It appears in Metroid: Zero Mission and Super Metroid with significant differences between versions. It did not exist in Metroid.

The entrance first canonically appeared in Zero Mission as a small room. It is first entered from the "statuary shaft" and leads out to a cliff overlooking the Landing Site. This room's door to the statuary shaft is contained inside the open maw of a large Chozo bust on the wall; the same kind of bust is found in the main cavern of the Chozo Ruins. There are five pillars in the room, with three containing flat-headed statues of Chozo in forward-facing, crouched positions (not the same statues that hold items for Samus). There are also two pillars with flat platforms at their tops. All statues have Chozo script etched into them. Some of the pillars are topped with obstructions made of Fake Blocks, which Samus can remove by shooting or bombing them.

In Super Metroid, the Chozo Ruins are no longer present and assumed to have been destroyed by the explosion of the Space Pirate Mother Ship. This room is in the same location as it was in Zero Mission, but now appears as a closed-off, straight cave corridor. It is a dead-end. Samus can only access it once she has either the Speed Booster or Space Jump (unless the Turbo Bomb is used), at which point she can Shinespark diagonally up to the right, or repeatedly jump up to the door. As it is a Yellow Hatch from the outside, she will also need Power Bombs. Scalding-hot lava rises and falls in this room, presenting a hazard. Samus can cross the room by jumping across multiple pillars rising from the floor. However, in the jagged ceiling are four low-hanging pipes and blocks, two of which are lined with spikes underneath that can harm Samus too. In addition, three Alcoons spawn along the way and must be killed to proceed. This is the only room in Crateria where Alcoons can be found. At the end of the corridor is a Power Bomb Tank.

These only appear in Super Metroid.

043 ADVANCE TO YOUR LANDING SITE (pg. 38)
"You'll break blocks and grab on to ledges as you advance to the left. The area between the last ledge and the ceiling is narrow. Use a diagonal shot to break the first block, then hop and roll onto the ledge and bomb the second block."' 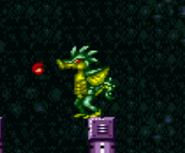