The Crystal Flash is a technique used in Super Metroid to regain health outside Energy Charge stations or Starship.

According to the Super Metroid comic[1], when the Chozo adopted the young Samus Aran and brought her to Zebes after she was orphaned by the Space Pirate raid of K-2L, they had infused her with their blood, endowed her with the Power Suit, and taught her one of their greatest technological achievements: the Crystal Flash technique embedded in the Power Suit, which could be used as a last-resort measure for healing. The technique creates a unique spherical cocoon of energy around a briefly suitless Samus, allowing her to absorb all of the energy of the Power Bomb, healing completely if she is at critically low health. The Crystal Flash also fills up the Reserve Tanks.

It is performed by following these steps:

Notes: The ammo supply will drop as the Crystal Flash is performed.

One should not perform this technique while in danger of being hit by an enemy as Samus is not invincible during this technique, meaning that she will take damage every frame that an enemy is in her hitbox for the duration of the Crystal Flash, greatly reducing her Energy recovery, or even killing her.

There is a glitch related to the Crystal Flash that allows Samus to access the Super Missiles that Spore Spawn rewards from the wrong way. [1] 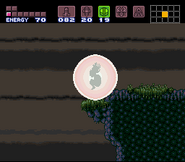 Samus uses the Crystal Flash in the Super Metroid comic.