They were the result of Galactic Federation scientists on the BOTTLE SHIP trying to create a special-forces unit based on the Space Pirates. The Zebesian type were to form the core of this unit. The scientists had presumably cloned Zebesians and experimented on them in order to create successful bioweapons. The synthetic implants made by the Federation are quite crude compared to those created by the Pirates themselves (seen on various Pirate classes encountered throughout the Metroid Prime trilogy).

When searching the Exam Center, Samus discovers an inactive Cyborg Zebesian making strange beeping noises and notices a Federation mark on its armor, leading to the revelation that the Federation was using the BOTTLE SHIP to create bioweapons. Later, when searching deeper into the building, Samus is ambushed by several Cyborg Zebesians and they appear as regular enemies after that.

Their claws are sometimes completely replaced with prosthetic ones. These can fire Missiles as well as beams. Their armor begins to break off as they take damage, revealing their Arm Cannons below the prosthetic claws and snapping off the fins on their backs. If Samus gets close, they will grab her. If she does not counter, the creature will slam her into its other claw then, while holding her, will hit her and inflict damage. If she is successful in countering, she will perform a spinning jump kick to the creature's head and knock it over, stunning it. If Samus performs an Overblast on the creature, it will be forced into a hunched posture. If Samus does not fire, the creature will straighten up, grab her, and then throw her on the side. The Cyborg Zebesians can be knocked down to ground and Samus can perform a Lethal Strike on them. She will grab its neck and swing around it, forcing it to kneel, then unleash a point-blank blast into its head.

CYBORG ZEBES (pg. 164)
"Cyborg Zebesians are Zebesians which have been reconstructed by the Galactic Federation. They appear frequently in groups and primarily use their beam to attack."

Samus using the Counter Attack on a Cyborg Zebesian.

Samus battling a Cyborg Zebesian in the Pyrosphere.

Cyborg Zebesians descend from the rafters to duel Samus.

A Cyborg Zebesian in the Exam Center, with mounted arm blaster.

Samus battling a group of Cyborg Zebesians in the Exam Center. 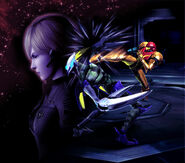 A Cyborg Zebesian performing its grab attack.
Add a photo to this gallery

Retrieved from "https://metroid.fandom.com/wiki/Cyborg_Zebesian?oldid=273622"
Community content is available under CC-BY-SA unless otherwise noted.