Leaves scatter when shot at

The Cyrlic tree is a bioengineered plantform created by the Chozo. It is often planted on other planets by them, and several can be found in Botanica and Save Station B on Eastern SkyTown, Elysia. These trees can also be found on Tallon IV. It is unknown if the tree was present on the destroyed planets Zebes and SR388, as they were not seen in any games taking place on either planet. In one case, the tree in the Main Plaza had been bioengineered to form a 'natural' bridge. These trees have striped red leaves.

Much like the plants in Brinstar in Super Metroid, Cyrlic trees are sometimes placed indoors (such as in the Arboretum) so it is possible that they do not use photosynthesis, but perhaps other means such as chemosynthesis, or both, like some bacteria. This connection may also signify that the Chozo planted the vegetation in Brinstar (which may be related to the Cyrlic tree) since they once lived on Zebes.

Tree
"This tree seems to be weakened due to cellular decomposition."

Bridge
"These large branches have been forcibly intertwined, forming what looks to be a bridge structure."

Leaf
"These leaves appear to be unnaturally dried and withered."

Branches
"These branches block most of the tunnel, but there is a small opening near the floor."

"Cyrlic tree is a bio-engineered plantform created by the Chozo. Often planted on other planets."

The name of this species is likely derived from the Cyrillic alphabet.

Nintendo render of the Ruined Nursery.

The roots of the tree cover the walls. 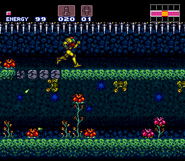 Several plants in Brinstar that may be related to the Cyrlic tree.
Add a photo to this gallery
Retrieved from "https://metroid.fandom.com/wiki/Cyrlic_tree?oldid=269858"
Community content is available under CC-BY-SA unless otherwise noted.