The Dachora (Dachola in Super Metroid Nintendo Player's Guide) are a species of ostrich-like animals found on planet Zebes.

An adult Dachora appears in Super Metroid, in which it teaches Samus Aran how to perform a Shinespark, a technique used with the Speed Booster. The Dachora continuously runs back and forth through a long corridor, building up speed before crouching and jumping extremely high; by imitating its motions, Samus can execute the Shinespark. A nest with an egg can be seen in the background.

Later, in the escape sequence in the end of the game, the Dachora and Etecoons are trapped in the Torizo's chamber in Crateria, which is being flooded with scalding-hot lava. Samus can rescue the trapped animals before the planet explodes; if she does so, a tiny white spaceship[1] will be visible leaving the planet along with Samus's Starship during the ending sequence. Although their rescue is optional in Super Metroid, the action is considered canon due to the fact that the same Dachora and Etecoons make a reappearance in Metroid Fusion.

The appearance in Fusion shows that the egg from Super Metroid had hatched, with a small Dachora chick as the result. The Dachoras and Etecoons are seen as the sole survivors of the X Parasite infestation aboard the Biologic Space Laboratories research station. They are found on the Habitation Deck, confined in a sealed, tropical themed area with hanging tires for the Etecoons to play on. It is unknown why these creatures were on board, or why the X did not target them as potential hosts, though Adam suggests the creatures had no useful capabilities for the X. After Samus releases them, the Dachoras and Etecoons go to Samus's new Starship, and they later save Samus from the space station's explosion after the defeat of the Omega Metroid by piloting her Starship into the Docking Bays to rescue her.

The further fate of the Dachoras and Etecoons is unknown, as they do not appear in Metroid Dread, nor are they even mentioned.

DACHOLA [sic] (pg. 49)
"A friendly ostrich-like creature, a Dachola, will show you the way out of this section. Just pay attention to what it does. Build up speed along the bottom and then Super Jump up the vertical shaft."

DISCOVER THE SUPER JUMP (pg. 31)
"The strange bird will execute a super jump (see Special Techniques) for your pleasure. Watch it and practice the move."

Akinori Sao: Yamamoto-san, what part of Super Metroid do you recommend?

Yamamoto: This is a bit detailed, but after you beat the last boss, Mother Brain, Samus escapes, right? The planet is beginning to explode, so you really have to hustle. But at a certain spot, there's a Dachora and some Etecoons…

Sakamoto: Dachoras and Etecoons are alien creatures who teach Samus new moves, and they've gotten trapped while trying to evacuate.

Sao: If you help them, the ending changes. Is that right?

Sakamoto: The ending doesn't exactly change, but when the planet explodes and Samus just barely clears the blast in her ship, out to the side you can see…

Sakamoto: About one dot of light shoots out from the exploding planet! (laughs)

Sao: (laughs) You understand from that one dot of light that they survived.

Sakamoto: I tried it myself, and the dot was so small I could barely see it! (laughs)

Sao: Is that because it was an old tube TV?

Sakamoto: Yes. With the high resolution screens today, you should be able to see it clearly. I hope people will check that out for themselves.

Yamamoto: There may also be people who played Super Metroid before who don't know about that. I hope they will play the game again and help those creatures! [2]

Samus rescuing the Etecoons and the Dachora in Super Metroid.

Samus rescuing the Etecoons and the Dachoras in Metroid Fusion. 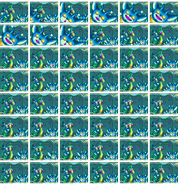 Sprites for the Dachoras and Etecoons when filmed by a security sensor. 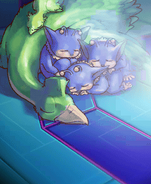 The Dachoras and Etecoons at the end of Metroid Fusion.