The "Dachora's room" is a room in Brinstar. It appears in Super Metroid.

The room is a long corridor set in Brinstar's pink region. It connects directly to the massive "pink shaft" in central Brinstar, and the entrance shaft of Brinstar. Throughout the corridor's background are numerous plant stalks with bulbs, as well as mysterious bush or pod-like objects. The floor is inconsistently flat, with a few ramps along it. Near the center is a solid wall, which can be destroyed with Bombs, and later a Power Bomb or the Speed Booster. On Samus's initial visit, there is little to do in this room besides proceed through it into the pink shaft.

Later, if Samus revisits the room after collecting the Speed Booster, it becomes possible for her to fall into a "trap". If she runs across the floor close to the destructible wall until the Speed Booster activates, she will break through part of the floor, which consists of Boost Blocks, and fall down a long shaft. This leads to another stretch of hallway, at the end of which is the friendly Dachora creature and its egg. It is not possible for Samus to interact with the egg, and it remains part of the scenery, ultimately hatching at some point before Metroid Fusion. The Dachora provides a hidden tutorial for the Shinespark, running back and forth across the lower hallway and then jumping up the shaft at full power. Samus can practice doing the same. Should she run low on energy, there is an Energy Charge through a door on the left down here.

While the Dachora will usually not follow Samus through the Boost Block floor at the top of the shaft, it is possible for it to escape the shaft along with her. This can be done if Samus Shinesparks at the same time and in the same place as the Dachora. She will fly up first, followed by it. Above the shaft, it will simply run left and back, Shinespark upward, and repeat. A demonstration of this can be viewed here.

The Dachora later escapes this room on its own and somehow ends up in the chamber where Samus fought a Torizo. She can free it and three Etecoons during the end countdown sequence. While optional, this scene is canon as the creatures reappear - along with the Dachora's hatched chick - in Metroid Fusion.

Samus encountering the Dachora is depicted in one of the clips played as part of the attract mode.

DACHOLA [sic] (pg. 49)
"A friendly ostrich-like creature, a Dachola, will show you the way out of this section. Just pay attention to what it does. Build up speed along the bottom and then Super Jump up the vertical shaft."

DISCOVER THE SUPER JUMP (pg. 31)
"The strange bird will execute a super jump (see Special Techniques) for your pleasure. Watch it and practice the move." 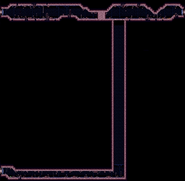 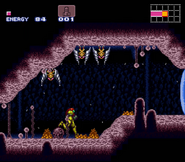 Samus falls through the floor.

The Dachora above the shaft, if freed.
Community content is available under CC-BY-SA unless otherwise noted.
Advertisement