Can open Purple hatches and Portals, and extinguish Light Crystals and Light Beacons.

The Dark Beam (ダークビーム Dāku Bīmu) is a weapon of Luminoth origin that mimics the dark energy type of Dark Aether and its denizens. This weapon is compatible with Samus Aran's arm cannon, and was integrated into her suit during the events of Metroid Prime 2: Echoes.

The Dark Beam fires strange energy similar to the native energy of Dark Aether. Normal shots resemble swirling flattened disks of this dark energy, trailed by a dark streak and globular emanations. Shots are strong but slow, and quicker enemies can dodge them. Larger concentrations cling to objects, hardening into a brittle shell on contact (see Entangler below). Large quantities of this energy charge and open highly hazardous dimensional rifts (see Darkburst).

The Luminoth originally designed the Dark Beam as a means to combat the Ing Horde, theorising that the energy of the Dark Beam would overload the creatures of Dark Aether, and in effect destroy them. Once tested, this weapon was discovered to be of only average effect against the Ing, causing little damage. With further trial and error, the Light and Annihilator beams were created, which proved to be much more efficient in the battle against the Ing.

Along with activating dark Portals, the Dark Beam has the ability to activate many types of crystalline technology throughout the surfaces of the mirror planets. Firing the Dark Beam at Light-charged crystals can have many effects, ranging from lifting a platform, to moving machinery. The Dark Beam cancels the functioning of Light Crystals and Light Beacons, causing protective umbrellas of light energy to disappear from the surface of Dark Aether. Fortunately, this effect is only temporary, and can be reversed at any time with an application of the Light Beam, or several Power Beam shots. The Dark Beam is also used to open Purple hatches.

A charged mass of dark energy has the strange ability to encase targets, and harden into a brittle shell. The Entangler, the Charge Beam technique for the Dark Beam, exploits this quality. Firing the Entangler will encase multiple targets within a certain radius completely, immobilizing and providing the perfect opportunity to shatter the target with a single Missile, making it quite similar to the Ice Beam from Metroid Prime. This technique is highly effective for use against the troublesome Dark Pirate Commandos, and also effective when used in tandem with the charged Light Beam against Dark Grenchlers.

It is not necessary to directly hit a target with the Entangler, as it will attach to any possible targets within a short radius. Targets hit with the Entangler will become "sticky" for a short time, and cause any other creatures that come into contact with this target to freeze as well, but this will only occur before the dark matter has hardened around the original target. The Entangler seems to possess 'cold' attributes, as it is capable of rendering Metroids extremely fragile to concussive weaponry, a result given by the Ice Beam as well.

Once acquired from the Mining Station B, Agon Wastes, Samus can use the Darkburst, the Charge Combo for the Dark Beam. Though it uses up 30 Dark Ammo, as well as 5 missiles, it creates a large sphere from the arm cannon, moving on a fairly fast, straight trajectory.

This particular charged combo is of great use against aerial foes, or large numbers of enemies, ripping apart its molecular structure and drawing it into a "dark dimension, pulling enemies to oblivion."

"The Dark Beam can hinder enemies, extinguish Light Crystals, and is effective against Light Aether enemies. Charge it to fire the Entangler, which enshrouds enemies in shadow. The Dark Beam can open purple hatches."

The Dark Beam fires blasts of shadow energy. Shots from the Dark Beam can hinder enemies and objects as well.
Press

and point left to select the Dark Beam as your active weapon.

The "dark energy" fired by this weapon is known to current terrestrial science, if only hypothetically: cosmologists believe that this "negative gravity" permeates the vacuum of space and repels all matter, driving the expansion of the universe. If significant amounts of the field could somehow by concentrated and fired, the massive yet localized expansive force would likely be quite damaging, tearing the target apart from within.

Samus using the Dark Beam to battle a Space Pirate in an early version of Metroid Prime 2: Echoes.

A render of the Dark Beam from Echoes. 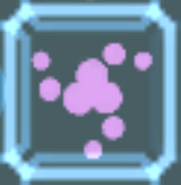