Wikitroid
Register
Don't have an account?
Sign In
in: Articles with non-canonical information, Phaaze, Species,
and 5 more
English

Hyper Beam
A Dark Echo is a copy of Dark Samus created during her battle with Samus on Phaaze. Dark Echoes are created by 'splitting' from Dark Samus (much like a cell undergoing mitosis), and are identical to the real Dark Samus save for their black, empty visor area. They behave in a near-identical manner to the real Dark Samus, possessing a simple Phazon-based copy of the Power Beam, along with some of Dark Samus's other moves. However, they have a far smaller supply of health than Dark Samus, and can be destroyed easily. After Dark Samus directly possesses Aurora Unit 313, it projects from its eye a second type of Dark Echo that is somewhat ethereal and significantly weaker.

One of their purposes is to act as decoys to distract Samus as Dark Samus absorbs Phaaze's energy to replenish her own in the final battle between the two, and to that effect, they can create the illusion of draining energy as well. Dark Samus will use one at first, but later can create two after taking enough damage. Their other purposes is to aid Dark Samus in amplifying some of her attacks by recombining with her.

Dark Samus can also perform another move with the Echoes, in which she and the Echoes will levitate a few inches off the ground and spin around the room rapidly, making them difficult to hit until the move ends and causing damage when hit by them. Another attack they can create together is a large, spinning, double Plasma Beam shot from the center of the room in opposite directions (this is performed only with one Echo at a time). If the Echoes fuse back into the original, Dark Samus will gain a purple aura that makes her invulnerable to attacks, along with one or two spinning lights (depending on the amount of Echoes she fused with).

Even weaker Dark Echoes are generated by Dark Samus when she is controlling the Aurora Unit 313. The Aurora goes into an immobile state when these Echoes are produced, possibly to concentrate solely on their control. They will either shoot at Samus or, after turning into their Morph Ball forms, use the Boost Ball ability to speed across the arena in a zig-zag pattern in an attempt to impact her. They are fairly easy to dodge and easy to kill for powerups. After some time, these Echoes will vanish into thin air.

In one of Dark Samus's victory poses, she splits off from a Dark Echo with an acrobatic kick, before they levitate in a circle and re-merge. 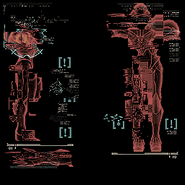 Two Dark Echoes appear alongside the AU in a Diorama.
Deutsch Español Русский
Community content is available under CC-BY-SA unless otherwise noted.