Wikitroid
Register
Don't have an account?
Sign In
Advertisement
in: Pages with conjectural titles, Darkling, Aether,
and 3 more

A Dark Luminoth is a presumed name for a Luminoth that has been possessed by the Ing Horde. Many Luminoth, after finding out that the Ing Horde can even possess their own race, had stated that they would rather "self-terminate" or commit suicide than become a weapon for the Ing. Although they are mentioned in Luminoth Lore, they are not actually seen during gameplay as all of them had most likely been terminated.

Interestingly, there is no evidence of the Ing possessing dead Luminoth (either those killed in battle such as the Keybearers or those who self-terminated when possessed). This is surprising given the Ing's ability to possess the corpses of Federation Marines who landed on Aether. A scan implies, however, that the Luminoth, if they killed themselves to prevent themselves from becoming Darklings, also decomposed their limbs, implying that they made measures to ensure the Ing would not take control of their corpses.

"In time, the Ing began to possess Luminoth as well as creatures. Friends and family members became the enemy, spilling Luminoth blood across the land. Desperate, we devised shielding to prevent Ing possession. It was effective, but not perfect. Should the shielding fail, all Luminoth were prepared to self-terminate, rather than become a weapon for the Ing."

QUESTION: I started playing from MZM so with MP2 I only have two Metroid games. MP2 was also profoundly interesting. My question is why is it that the Ing can possess life from seemingly anywhere? And, why weren’t the Luminoth possessed?

ANSWER: The Ing are capable of going back and forth from the Dark and Light worlds. They are also capable of possessing the Luminoth. In the Luminoth lore there are records of this occurring.[1] 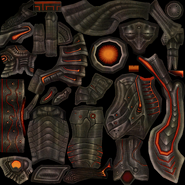 Textures for the unused variant. 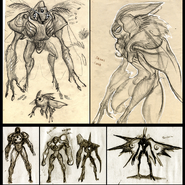