Dark Samus (ダークサムス, Dark Samus?) is the main antagonist of the original Metroid Prime series. Originally appearing as the Metroid Prime, a Metroid heavily mutated by Phazon, Dark Samus first began to make cameo appearances in the Super Smash Bros. series in Brawl, before becoming a playable character in Ultimate.

A "Dark Samus" appears in Co-Op Event 7: Battle of the Dark Sides. This one looks more like The Legend of Zelda series's Dark Link (whom she is partnered with), in that the character is only a black silhouette of Samus and not the Phazon doppelganger in the Metroid series.

Dark Samus has a trophy based on her Metroid Prime 2: Echoes appearance, which reads:

Dark Samus
A twin image of Samus, encountered near the beginning of Metroid Prime 2: Echoes. Dark Samus is identical to Samus in every way but color—she even uses similar attacks. There are many theories on the origin of Dark Samus, but none are proven. Dark Samus uses Phazon for energy and can absorb it to heal damage. Samus encounters Dark Samus a number of times.

This trophy description is inaccurate, as Dark Samus's appearance does differ quite a bit from the original Samus's, and her origins are known in that she was born from Metroid Prime.

In Super Smash Bros. for Nintendo 3DS and Wii U[]

Dark Samus appears as an Assist Trophy along with Mother Brain and a Metroid, using several of her attacks from Metroid Prime 3: Corruption: the scattershot (its wide range has noticeably been reduced), which deals a total of 21% damage, launching the three large Phazon orbs which quickly home in on their target, dealing 6% for each sphere, and lastly, the Phazon shield raised from the ground-up, which deals 12%. The former two attacks have low knockback, and the latter has moderate knockback. She dashes across the floor while floating and jumps to reach the nearest opponent, only touching the ground when landing and attacking. She can be made to flinch when hit by an attack, and defeated if damaged enough. After several moments, she looks towards the screen while slightly lifting her Arm Cannon before vanishing. If she is defeated, she disappears by fading with a bright blue flash, similar to how she disappears after her encounters in Echoes.

Additionally, Samus also has an alternate costume which gives her Dark Samus's color scheme. This costumed Samus is used in the Event Match Galactic Avenger, which simulates a battle between Samus, "Dark Samus" and Ridley (a non-playable stage boss) on Pyrosphere, with Samus's goal being to defeat them in order to avenge her parents.

"An energy-based life-form that bears a striking resemblence[sic] to Samus. Dark Samus will fire high-speed and homing missiles at opponents and, if approached, will use strong attacks to launch enemies."

NTSC
"This terrifying creature is made of Phazon. Along with regenerative abilities, she can also brainwash her victims and clone herself. Summoned into Smash Bros., she resembles Samus Aran and mimics some of her moves, firing Arm Cannon blasts, launching homing missiles, or even unleashing Phazon."

PAL
"An exceptionally strong and terrifying being made of Phazon. She's able to regenerate, brainwash her victims and even clone herself. When summoned in this game, she'll either fire rapid blasts from her Arm Cannon, launch homing missiles, or unleash Phazon across the surrounding area, depending on where her target is."

"This energy-based life-form looks a lot like Samus. Dark Samus fires homing missiles and rapid-fire rounds at fighters on the stage."

"Dark Samus can be defeated by dealing enough damage. However, anyone who gets too close to her may receive a burst of Phazon energy." 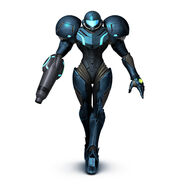 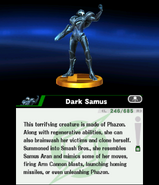 Dark Samus makes her debut in the Super Smash Bros. series as a playable character in Ultimate. This marks her first playable appearance in any video game (a distinction she shares with fellow Metroid villain Ridley, Wii Fit Trainer, the Duck Hunt dog, Palutena and Piranha Plant). She was confirmed in the August 8, 2018 Nintendo Direct to act as an Echo Fighter of Samus, thus giving her a nearly identical moveset. None of the attacks used by her Assist Trophy in the previous iteration of Super Smash Bros. are featured in her moveset. Dark Samus levitates when moving and has an identical weight class to Samus.

Masahiro Sakurai stated in the Direct that fans may have seen her inclusion coming, since she had been highly requested as a fighter for more than a decade. According to Sakurai's weekly Famitsu column, both she and Chrom from Fire Emblem, who was revealed shortly before her, had been introduced in Ultimate due to their massive popularity overseas and in Japan, respectively.[2]

Dark Samus is primarily based on her appearance in Metroid Prime 3: Corruption with embellishments on the shoulder pads. One of her victory poses depicts her splitting off from a Dark Echo, making acrobatic movements and then re-merging together, before assuming Samus's pose in her stock art.

Samus's alternate costume based on Dark Samus has been removed and replaced with a new color scheme, of a black suit with yellow lights. Dark Samus was not present during the Assist Trophy showcase, which led to correct speculation that she could be unveiled as an Echo Fighter before release.[3]

Dark Samus is the third fighter in the series history to be featured as a summon character (either from a Poke Ball or Assist Trophy) and become playable in a later installment, after Charizard and Little Mac and before Isabelle; Dark Samus is the second Assist Trophy character with this distinction. She is the first Smash character to have been created in America, and the second outside of Japan (after Diddy Kong, created by Rare Ltd. in England).

She is also the second character in Smash who was created by a Nintendo-owned subsidiary (Retro Studios); the first was Shulk, who was created by Monolith Soft. Dark Samus is the first fully playable female villain in Smash (discounting Wendy O. Koopa, who is an alternate costume of Bowser Jr.) and the first and only Echo Fighter/clone of one of the "original 12" characters (the twelve fighters who have appeared in every game since Super Smash Bros.), Samus. On that note, she is also the second Echo Fighter to be derived from a female fighter (the first being Princess Daisy, who acted as an Echo Fighter to Princess Peach), and one of two Echo Fighters to be an actual clone of their base character in their home series (the other being Dark Pit).

The first showcase of Dark Samus in gameplay was released on August 21, 2018 by Nintendo, and is viewable here: [1]

In her on-screen appearance, Dark Samus emerges from a wormhole with it collapsing behind her shortly thereafter. Dark Samus's Boxing Ring title is Phazon Incarnate.

Her Classic Mode route is titled The Great Poison Given Form, as a reference to the fact that the Chozo in Tallon IV called Phazon the "The Great Poison". The first five battles of the route consist of team battles against various Nintendo heroes, with Dark Samus' ally as another hero of that franchise wearing dark costumes. This is likely intended to signify the corruption powers of Phazon, which can convert allies into enemies (as seen in Metroid Prime 3). Furthermore, the fourth battle has Dark Samus teaming with Ivysaur against Squirtle, Charizard and Pikachu, which might be a reference to Flaahgra.

Ultimate is the first and so far only entry to depict Dark Samus with eyes visible behind her visor, as one of her victory poses depicts a close-up of her face and shows her with blank eyes behind her visor, reminiscent of another Samus doppelganger. While Dark Samus does have eyes (as seen in the final battle of Echoes), they are normally not visible through her visor.

Role in World of Light[]

In the World of Light story mode, although never seen, Dark Samus is presumably obliterated by Galeem during the beginning of the story, with her body being used as a template for various puppet fighters. She is not awakened until the third and final act, where she is held by the dark forces led by Dharkon, Galeem's dark counterpart. Freeing her is required to have agents belonging to Galeem holding Master Hand and Palutena captive to appear on the field.

"Dark Samus joins the battle as Samus's echo fighter. With floatier movement, she's a little different from Samus--and she doesn't roll when dodging or jumping. If you look closely, you can see that her bombs and missiles look a little different, too."

"Summoned into the Super Smash Bros.™ Ultimate game, Dark Samus joins the battle as Samus's echo fighter. With floatier movement, she's a little different from Samus--and she doesn't roll when dodging or jumping. If you look closely, you can see that her bombs and missiles look a little different, too."

Palutena: Is that Dark Samus?!

Pit: You know her?

Viridi: Samus's suit and a Metroid combined? There's no way she isn't strong.

Palutena: Oh, she's strong all right. Along with ruthless and cunning.

Palutena: It's Phazon. A blue radioactive substance that can produce massive amounts of energy. However, it can suddenly mutate and become invasive to mineral elements, making it incredibly dangerous.

Viridi: The monkeys never should have messed with the stuff, but they insisted and it blew up in their faces.

Palutena: Dark Samus was defeated, but the power of Phazon brought her back. A sentient Phazon being with free will. Between Dark Samus and Ridley, Samus has no shortage of archenemies.

"Dark Samus joins Super #SmashBros Ultimate as Samus' Echo Fighter. It [sic] has floatier movement than Samus – and it [sic] doesn't roll when dodging or jumping. Its [sic] bombs and missiles look a little different, too. #Metroid"[7]

Panoramic artwork of all fighters.

Dark Samus is added to the panoramic artwork at the end of the Nintendo Direct that announced her inclusion.

The wave of fighter amiibo that includes Dark Samus.

Dark Samus with other newcomers.[14]