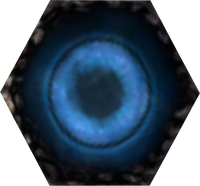 The light and dark variants of the Sentinel Crystals are similar in function to Airthorns, in which they were all created with the purpose to inform their Luminoth creators of enemy activity and incoming danger, though the latter mechanoid was designed for aerial patrol.

The Dark Sentinel Crystal is notably one of the few devices used by the Luminoth in Dark Aether not to have been corrupted or destroyed by the Ing. Others are the Light Crystals, Light Beacons and Airthorns. The crystals are also one of three Luminoth devices to ever make use of dark energy, the others being the Dark Beam and Airthorns, which is likely equipped with a similar dark energy shield that allows it to function unhindered within Dark Aether.

Xenotech: Dark Sentinel Crystal
Monitor system designed for use on Dark Aether.
Used by Luminoth soldiers to monitor critical areas throughout Dark Aether. Few remain; those that do broadcast data to U-Mos of Aether.

The original Sentinel Crystals were durable, but they had their limits. The toxic nature of Dark Aether, coupled with constant attack from the Ing, destroyed many of them. The Luminoth responded with the Dark Sentinel Crystal. Sheathed in dark energy, it is more resistant to the atmosphere of the Ing homeworld - and the attacks of its denizens.