The Dark Sphere is an object that resides in the Dark Agon Wastes and provides Dark Energy to the Amorbis (which attach and detach themselves from the sphere), resulting in the creatures going through some sort of transformation. Scanning it reveals that it is invulnerable to all weaponry. When Samus deals internal damage to the Amorbis trio through the use of Bombs, they convulse violently and unintentionally slam the Dark Sphere against the ground, cracking it little by little. At the end of the battle, the sphere breaks open in an explosive manner, revealing the Dark Suit within. 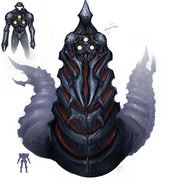 Concept art of the Amorbis with its dark armour.

Concept sketch showing the three Amorbis with the Dark Sphere.

The destruction of the Dark Sphere.
Add a photo to this gallery
Retrieved from "https://metroid.fandom.com/wiki/Dark_Sphere?oldid=224456"
Community content is available under CC-BY-SA unless otherwise noted.