Dark Splinters inhabit planet Aether and its opposite, Dark Aether. Compared to its unpossessed variant, a Dark Splinter is much stronger and more resilient to damage from normal weaponry, requiring two fully Charged shots of the Power Beam to deal with (Normal/Veteran mode). However, it can also die from a single blast from the Light Beam, a natural weakness that the Ing passed to its host. Visual differences between a Splinter and a Dark Splinter is the latter's dark coloration, as well as the presence of the Ing's glowing red particles on the darkling's front. Dark Splinters behave and attack identically to Splinters, which is similar to the Beetles from Tallon IV.

Involvement in the Aether Incident[]

While the Splinter species's aggressiveness and goals are linked to their natural survival, all Dark Splinters inherit the Ing Horde's sentience and its will: the subjugation and death of all inhabitants on Aether, including any unfortunate extraterrestrials present on the planet. Prior to the events of Metroid Prime 2: Echoes, an innumerable group of Ing invaded the Splinter Hive on Temple Grounds and possessed an equally innumerable amount of Splinters: the resulting Dark Splinter army were the cause of the GFMC Task Force Herakles' demise.

When Samus Aran entered the Temple Sanctuary, a smaller group of Splinters and an Alpha Splinter nesting within were converted into darklings. The Dark Alpha Splinter and Dark Splinters' mission was to steal Aether's last remaining planetary energy from the Main Energy Controller found inside the Great Temple. Were it not for Samus' unintentional interference, the Ing would have likely won the war against the Luminoth, resulting in the stabilization of Dark Aether and the obliteration of the opposite light planet.

Dark Splinters are found in these rooms:

Target is host to a parasitic bioform. The presence of the parasite increases the target's overall combat threat level. Concentrated weapons fire will damage the target. 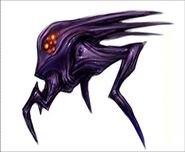 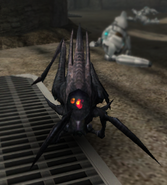 A Dark Alpha Splinter in the GFMC Compound

The hoard of Dark Splinters attacks the Federation's base.

A Dark Splinter attacks one of the Troopers from behind.

A huge swarm of Dark Splinters invade the Federation ship.

A Dark Splinter with a pair of normal Splinters
Русский
Community content is available under CC-BY-SA unless otherwise noted.
Advertisement