This article is about the attack from Super Smash Bros. For the ability from Super Metroid, see Speed Booster.

The Dash Attack[1] is an attack used by all characters in the Super Smash Bros. series. A Dash Attack is performed by pressing the attack button while a character is running on the ground, and typically feature the character using their momentum to carry out the move. Samus, Zero Suit Samus, Ridley and Dark Samus each have their own Dash Attacks.

This action has her adopt a pose that is nearly identical to her horizontal Shinespark in Super Metroid, especially in more recent Super Smash Bros. games. The attack is visually enhanced in Brawl and 3DS/Wii U, as Samus's charge is assisted by her Varia Suit's thrusters.

Damage 6~10%
Samus tucks her head and plows into your opponent shoulder first. Comes out fairly quick and has decent range as well. 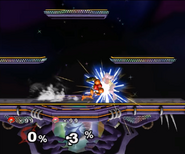 Wii U
Add a photo to this gallery

In Brawl, Zero Suit Samus's Dash Attack is a sliding kick, which deals 7% with a clean hit and only 5% if late. It also has transcendent priority and cannot be cancelled out if it collides with an opponent's attack.

In 3DS and Wii U, she received a new Dash Attack, in which she performs a knee strike powered up by her Jet Boots, which deals a buffed 8% with a clean hit but no longer has transcendent priority.

Damage 5~8%
Zero Suit Samus charges with a running knee attack at your opponent. Though it doesn’t have the best range, this isn’t an issue, given Zero Suit Samus’s speed.

Ridley's Dash Attack has him lunge forward while biting.

Retrieved from "https://metroid.fandom.com/wiki/Dash_Attack?oldid=271407"
Community content is available under CC-BY-SA unless otherwise noted.