The Deadly Six Stars are a group of six powerful entities that are the most trusted henchmen of Greed.

At the end of Samus and Joey, seven of Samus Aran's most important abilities were stolen from her by Greed using the Ability Disassembly and Conversion Device. This device converted her extracted abilities into data capsules, which were then given to the Stars, who planned to use Samus' powers against the galaxy.

Each Star has a capsule located in its body, and uses a much more powerful version of their respective ability against Samus, who is forced to find new ways to defeat them and regain her strength. When Samus fought Chrysta, the destruction of the capsule very nearly killed her since it was maintaining the temperature of the Solar Core Harvesting Facility, which was embedded into the center of the agricultural world's sun.

The Stars and the Capsules were considered no more than a distraction for Samus by Greed. When Bishop reports their annihilation, and that Samus seized five of the stolen seven Data Capsules, Greed brushes off the news. Animatronic variants of the Stars are encountered by Samus and her friends on the graveyard planet. They believe them to be zombies, with Bishop stating that the planet contains the vengeful spirits of those Samus has defeated, until Knight reveals they are just robots.

Bishop reveals in chapter ten that he possesses the Varia Suit and Plasma Beam Capsules, the former of which was thought to be lost on the ocean world, technically making him the seventh of the Deadly Seven Stars. 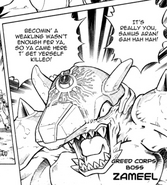 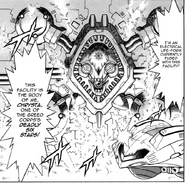 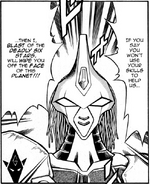 Retrieved from "https://metroid.fandom.com/wiki/Deadly_Six_Stars?oldid=224671"
Community content is available under CC-BY-SA unless otherwise noted.