Boost Ball
The Defense Drone is a robot that is located on SkyTown, Elysia and is the second boss fought there, after the Steamlord. Samus is ambushed by this mechanoid when she tries to acquire the Boost Ball. This trap was likely set up by the Elysians (to test those who wish to obtain the Boost Ball) or Ghor.

The Elysians designed the Defense Drone to guard key areas in SkyTown - however, only one is ever encountered. The Defense Drone's appearance is bronze-colored, bipedal, dome-topped and tank- like. Armor covers the entire outside of the unit, protecting it from harm. A feature at the lower end of the mechanoid looks similar to a rib cage. A large cannon protrudes from the base of the unit and is used for multiple attacks. A single yellow eye is the unit's main optical device. Three antennae are located above the robot's head, which can be damaged by beam or missile fire. After all three antennae are brought offline, the mechanoid will be stunned for a period. This allows the robot's optical device to be damaged by the Grapple Lasso, which causes an erratic spinning motion of the eye and reveals the drone's Control Unit. The dome splits into two parts, and the Control Unit is vulnerable to weapons fire. After the Defense Drone becomes critically damaged, the unit emits a deep fog that covers the area and impairs Samus's view.

After the Defense Drone is defeated, it short circuits and collapses, then explodes. The locking device that held the Boost Ball upgrade in place deactivates and the upgrade appears.

Offensively, the Defense Drone is very well equipped. The main cannon features a homing Plasma Bomb launcher and lock-on missiles. Both these attacks need to be charged for a brief period. The Plasma Bomb can be destroyed with an Ice Missile. Fewer missiles can be fired without charge. The feet are equipped with a booster for propelling the unit far for jumping, and also to slow the speed when falling. They also can create large, expanding electric shockwaves after landing. When the Control Unit is revealed, the Defense Drone will jump to high ledges around the room. It will then fire homing mine balls, which explode and splatter on impact. These are used as a distraction from damaging the Defense Drone's control mechanism and can be destroyed with several shots. 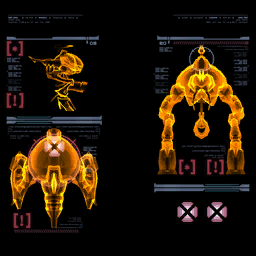 The Defense Drone is used to secure key areas within SkyTown. The externally mounted antennas are tied into the unit's optic array. By destroying all of the antennas, the optic array will overload and be vulnerable for a short period. The machine's Control Unit is also vulnerable, but must be exposed to be targeted. Its armor is immune to small-arms fire.

Scan when control unit is exposed
"Target's armor is open. Control Unit is now exposed and vulnerable to attack."

Samus knocks out one of the three antennas.

The Defense Drone is stunned. 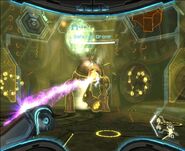 The Defense Drone's head is now vulnerable to attack.

Samus fires at the Drone. 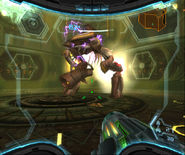 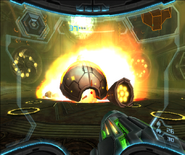 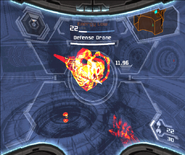 The Defense Drone's internal Engine core (center) as viewed through the X-Ray Visor (via Hacking).

The Defense Drone's pieces are shown on the floor in this Diorama. 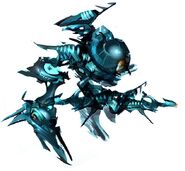 More Defense Drone art. This seems to be a Phazon-enhanced version.

Pre-release screenshot, in which the Defense Drone is called "Defense Mechanoid".

A decorative hologram depicting the Defense Drone, seen above the doors leading into the Ballista Storage building.
Español Русский
Community content is available under CC-BY-SA unless otherwise noted.
Advertisement