Autocannon can be temporarily disabled

The Delano 7 is a Delta-class Strike Fighter owned by the Bounty Hunter known as Sylux. A prototype fighter designed by the Galactic Federation, the Delano 7, like the rest of Sylux’s gear, was stolen by the hunter for his own purposes.

Clad in the same blue metal and green lights as Sylux's armor, the Delano 7’s wings are arranged in a vague X-shape, and it produces a contrail of blue smoke when in flight. Its underside sports a powerful cannon that can be remotely set to automatically fire on targets; however, a design flaw causes the cannon to become briefly disabled if the ship receives enough direct hits.

Sylux used the Delano 7 to travel to the Alimbic Cluster in his search for the “Ultimate Power” mentioned by a telepathic message. Both the Delano 7 and its owner would first be encountered here by Samus Aran, during her own initial exploration of the Vesper Defense Outpost. In the ensuing battle in the Weapons Complex, Sylux remotely commanded the Delano 7 to fire on his enemy, but escaped in it after Aran defeated him. She later spotted the Delano 7 a second time on Alinos when it flew over Samus in the Alimbic Gardens, its pilot apparently unaware of her presence.

After the Infinity Void was unlocked, Sylux used the Delano 7 to enter the Oubliette. When Samus’ defeat of Gorea caused the structure to self-destruct, Sylux and the other hunters escaped in their respective ships. While these were only seen as distant, colored lights, it is evident that the blue light was the Delano 7.

SYLUX's Delta-class Strike Fighter is believed to be a stolen Federation prototype. Due to an unresolved flaw, the autocannon can be temporarily disabled by several direct hits to the ship's hull.

The Delano 7 above the Alimbic Gardens.

The Delano 7 and all other bounty hunter ships escape the Oubliette. 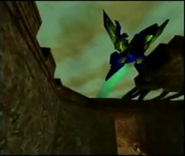 Delano 7, as it appears in an early version of Metroid Prime Hunters. 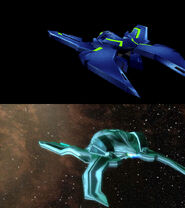 The Delano 7 in comparison with the mysterious spacecraft