The Demo Screen (as named in the manual) is the iconic introduction cutscene in Super Metroid. In this scene, Samus Aran narrates the events of her Zero Mission and the subsequent SR-388 incident, or in real-world terms, the previous two games, Metroid and Metroid II: Return of Samus. While her dialogue text is always in English, the game's Options allow the player to display Japanese subtitles (NTSC only) or German or French subtitles (PAL only). It is preceded by the famous phrase "The last Metroid is in captivity. The galaxy is at peace." spoken by Dan Owsen.

On the Demo Screen, Samus reflects on her mission to Zebes, where she battled the Metroids and Mother Brain, the leader of the Space Pirates. After her mission, Samus was dispatched to SR388 to eradicate the Metroids completely. She eliminated all but one, a baby that hatched from its egg in front of her. Following her "like a confused child", Samus elected to bring it to the Space Science Academy on Ceres Space Colony for testing. Brief clips are shown re-enacting the Mother Brain battle and baby hatching scenes from the first two Metroid games, as well as pictures of Samus shaking the hand of a scientist after donating the baby, followed by studies being conducted on the infant. Satisfied that her work was done, Samus left Ceres in search of a new bounty. However, soon after leaving she receives a distress signal from Ceres, and doubles back. This scene leads into her return to Ceres, and the beginning of the game.

This Demo Screen is notable as being the first time Samus had spoken extensively in a Metroid game, albeit via text. Samus's helmet and the shoulders of her Power Suit can be seen with shadows cast on her, and with her left eye clearly visible (which she will frequently blink). The Theme of Samus plays throughout the cutscene, until Samus says "Ceres station was under attack!!". Metroid: Samus Returns uses a similar-styled introduction, right down to a remix of the Theme of Samus, although it is instead narrated through a second-person perspective. 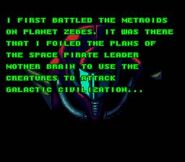 Flashback of the ending of Metroid. 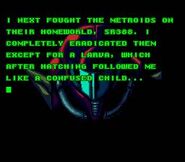 Flashback of the ending of Metroid II. 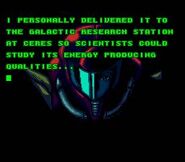 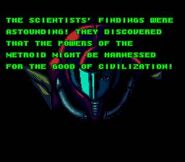 The scientists study the baby. 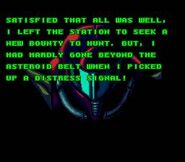 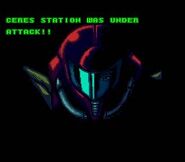 Add a photo to this gallery
Retrieved from "https://metroid.fandom.com/wiki/Demo_Screen?oldid=260971"
Community content is available under CC-BY-SA unless otherwise noted.