The Desbrachian[1] (デスバルク星人, Death Bulk?)[2] is a large, somewhat beetle-like creature that makes its first appearance in the endgame of Metroid: Other M, where they are controlled telepathically by MB. Samus must contend with at least four of them at once alongside Madeline Bergman and a cohort of Galactic Federation soldiers in the Bioweapon Research Center control room.

In various places on the BOTTLE SHIP, Desbrachians can be seen in a hemispherical, cocoon-like form that occasionally covers doors leading to hidden passageways or expansions. At first, Samus is unaware of their true nature, but it can be quickly inferred they are obstacles to expansions and passageways as the Search View states "Power Bomb" when targeted, which she may only obtain after the post-credits sequence. If the Power Bomb is executed upon the cocoon, it will open up into a Desbrachian, and attack.

Many Desbrachian attacks only involve sweeping its arms around and moving at high speeds. Also, if Samus tries to jump while a Desbrachian is active, it may jump at her and slam her down to the ground, dealing heavy damage. The creature will also grab Samus and throw her hard onto the ground if she's in range.

Desbrachians are implied to be a sort of "supersoldier" organism for MB, and they truly are a force to be reckoned with; they are highly resistant to both Samus' Plasma Beam and her Super Missiles, although three Super Missiles can destroy one. Many of a Desbrachian's attacks can drain an entire Energy Tank, even when Samus is equipped with the Gravity Feature. The organism also displays an ability to retreat into a green-tinted version of its cocoon and regenerate when low on health, so it is recommended to use a Lethal Strike on them. However, laying a Power Bomb will dislodge a Desbrachian from its regenerating state.

If Samus tries to fire a Missile at the Desbrachian, there is a possibility it will hit its armor and bounce back at her, dealing light damage. Also, a Missile will cause the Desbrachian to produce a sort of purple shockwave which impairs Samus's vision for a while.

When using a Power Bomb while it is not attempting to regenerate, the Desbrachian will immediately retreat into its cocoon, but is promptly knocked out of it. However, it does not receive any damage.

"The Desbrachians hide in power-bomb blocked gates. They are incredibly fast, and have powerful dash and jump attacks. Without Sense Move, the Desbrachian is a dangerous opponent."

A Desbrachian in Metroid: Other M

A close-up of a Desbrachian. 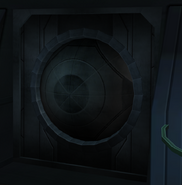 A Desbrachian in its cocooned form.

Retrieved from "https://metroid.fandom.com/wiki/Desbrachian?oldid=277774"
Community content is available under CC-BY-SA unless otherwise noted.