Dig was the commercial for Metroid Prime Hunters directed by Len Wiseman and featuring a grave digger burying dead bounty hunters. The special effects were done by Ntropic and it was produced by the Leo Burnett advertising agency.

0:00: A futuristic craft zooms overhead as the camera pans down to a lone gravedigger.

0:07: Cut to the gravedigger's shovel, steadily carving a grave.

0:09: The gravedigger finishes digging and stabs his shovel into the ground.

0:11: A futuristic headstone has been placed. The gravedigger clicks a button on his arm, and the headstone's screen flickers on, reading:

0:14: The gravedigger resumes digging, and behind him can be seen hundreds of graves.

0:15: In the distance, bodies are falling into the graves.

0:19: A body falls into the grave right next to the gravedigger, who looks up in alarm.

Len Wiseman, director of the Underworld series, was hired for his talent in creating dark atmospheric worlds. The 32-second commercial was intended to, in his own words, “give the players a sense of how high the body count is going to be in this game, the amount of mayhem, and just how vicious Samus can be. I mean she’s killing so many bounty hunters that our gravedigger here is just trying his best to keep up. He’s dug thousands of graves and Samus is just dropping her victims like crazy.”

To create the eerie setting, the commercial was shot at night, with only the gravedigger’s goggles, the headstones, and his shovel providing light in the shots. A futuristic city would provide the backdrop, and Wiseman felt it was important to also provide an “old world” tone, with much of the technology shown looking used and gritty. The gravedigger was filmed alone on set, with only a few graves behind him and fog machines used to create the smog around him. Many of the commercial’s details, like the hovercraft, the hundreds of other graves, and the city backdrop were CGI.[1] 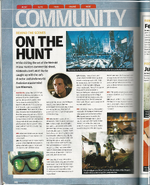 A Nintendo Power interview with Len Wiseman on the development of Dig.
Add a photo to this gallery

Retrieved from "https://metroid.fandom.com/wiki/Dig?oldid=261041"
Community content is available under CC-BY-SA unless otherwise noted.