A Door (or Hatch) is a pathway which leads Samus Aran into new rooms. They have appeared in every Metroid game to date except Metroid Prime Pinball. Doors almost always feature low-level energy shields that can be disrupted by weapon fire. The most common type of door is the Blue Door, which can be opened with any type of weapon.

Many doors are covered with Blast Shields, which must be destroyed with a certain type of weapon before the door itself can be opened. The most common blast shield is the Red Blast Shield, which requires Missiles to open. Certain games also feature Green and Yellow Hatches.

In Metroid: Zero Mission, many Chozodia rooms have open doors that do not need to be shot.

In Super Metroid, aboard the Ceres Space Colony, there are doors that automatically open if someone is nearby. They do not require to be shot to open. They do appear to have a fail-safe protocol and automatically lock themselves, seen during the battle with Ridley.

In Metroid Fusion, the security hatches in the BSL station do not require specific weapons to open. Instead, Samus had to unlock each type of hatch in special Security Rooms hidden in various parts of the station. After each type of security hatch was unlocked, they could be opened with any weapon.

Aboard the BOTTLE SHIP in Metroid: Other M, doors are either green, red or orange. Green doors are doors that can be opened, red are doors that cannot be opened, and orange doors require a certain action to open. There are also types of Super Missile shields, Seeker Missile shields, and Missile Shields. Doors now open automatically once unlocked and do not need to be shot, like to those in the aforementioned Ceres Space Colony. It is likely that the doors on both facilities do not have to be shot open because the personnel do not carry weapons.

In Metroid: Samus Returns, doors are colored yellow. In addition to blast shields, some doors are unpowered or blocked by obstructions that require the Charge Beam, Wave Beam, Spazer Beam, or Plasma Beam to open: Charge Doors, Taramargas, Gigadoras, and Gryncores respectively.

Encountered in every game except Metroid Fusion and Metroid: Other M these basic doors can be opened with any weapon. Metroid: Samus Returns uses yellow-colored doors but nonetheless retain the same function as the blue doors.

Encountered in Metroid: Zero Mission, Super Metroid, and Metroid: Samus Returns. These doors will not open until a specific task has been completed, such as in Tourian, where the doors lock when there are Metroids to be defeated. When encountering a Metroid in Samus Returns, the door instead appears similar to the normal doors but with a red hue.

Violet doors that are opened with the Wave Beam. Found in Metroid Prime.

White-fringed doors that are opened with the Ice Beam. Found in Metroid Prime.

White-colored doors that are opened with the Light Beam. Found in Metroid Prime 2: Echoes.

Purple-colored doors that are opened with the Dark Beam. Found in Metroid Prime 2: Echoes.

Black-and-white-colored doors that are opened with the Annihilator Beam. Found in Metroid Prime 2: Echoes.

Green-colored doors that are opened with the Nova Beam. Found in Metroid Prime 3: Corruption.

Blast Shields are found covering normal Blue Doors throughout the Metroid series. While some are indestructible, there are several varieties that all require Samus Aran to use different weapons to destroy them. Once they have been destroyed, however, all Blast Shields are gone for good.

Blast shields that can only be destroyed by hitting all of the locks simultaneously with Seeker Missiles. Found in Metroid Prime 2: Echoes, Metroid Prime 3: Corruption, and Metroid: Other M.

These blast shields can be found in Super Metroid, Metroid: Zero Mission, Metroid Prime 2: Echoes, and Metroid: Samus Returns. They can be opened with a Power Bomb.

These blast shields are found in Metroid Prime 3: Corruption. They are vulnerable to the Ice Missile and possibly other cold-based weaponry, although this has yet to be proven.

Blast shields that are destroyed by using the Grapple Lasso to generate enough stress to pull them from their mounts. Found in Metroid Prime 3: Corruption.

First encountered in the Celestial Archives, Brown Blast Shields replace Red Hatches in Metroid Prime Hunters and, like in the rest of the Prime games, they require one Missile to destroy. There is only one in the entire game, as well as the entire series.

First encountered in the Celestial Archives, Green Blast Shields are only vulnerable to the Battlehammer.

First encountered on Alinos, Purple Blast Shields are only vulnerable to the Judicator, though they may also be vulnerable to other cold-based weaponry.

First encountered in the Celestial Archives, Yellow Blast Shields are only vulnerable to the Volt Driver, although they may also be vulnerable to other electricity-based weaponry.

First encountered on Alinos, Orange Blast Shields are only vulnerable to the Magmaul, but may also be vulnerable to other fire-based weaponry. They are similar to the Orange Doors in Corruption.

Red Blast Shields in Metroid Prime Hunters are only encountered on Arcterra. They are vulnerable to the Imperialist.

Instead of having Doors or Blast Shields that require different weapons to open, the BSL station is equipped with various levels of security hatches. Areas that are hazardous or are crucial to the station's operations are often placed behind high-level hatches. In order to open them, Samus Aran must first find the appropriate Security Room and manually unlock the security level. Some hatches may be destroyed and either function as open passages or impassable barriers.

This is Security Level 0; hatches of this level are gray in color, and are the most common hatch seen on the station. Adam is able to unlock this level at the beginning of the game.

This is Security Level 1; hatches of this level are blue in color. Adam asks Samus to unlock the Blue Hatches in Sector 2 (TRO) so she can reach the Bombs.

This is Security Level 2; hatches of this level are green in color. Adam asks Samus to unlock the Green Hatches in Sector 3 (PYR) so she can reach the Super Missiles.

This is Security Level 3; hatches of this level are yellow in color. Adam asks Samus to unlock the Yellow Hatches in Sector 5 (ARC) so she can reach the Ice Missiles. They do not exist outside of Sector 5.

This is Security Level 4; hatches of this level are red in color. Adam never authorizes Samus to open Red Hatches in Sector 4 (AQA), but she is forced to do so in order to get the Diffusion Missiles and return to a Navigation Room.

Certain doors can be closed by an untitled sixth kind of hatch, colored with purple or grey hazard striping. They are most commonly found in Navigation Rooms, but can also be found in rooms with bosses or other powerful enemies. These function similar to the Metal Door in that Samus cannot open them herself until a specific task has been accomplished. Adam has the authorization to lock and unlock these doors; normally he does so to prevent Samus from wandering off without listening to briefing, and during the climax of the game Adam uses the hatches of a Navigation Room to imprison Samus on the Galactic Federation's orders.

This door appears in Metroid Prime and Corruption. Occasionally, some doors will not be active and Samus cannot use them. To restore power, she must energize one or more Power Conduits in the area with her Wave Beam in Prime, or weld back the missing wires with her Plasma Beam in Corruption.

This door appears in Echoes. It is invulnerable to all weaponry. To open the door, Samus must activate the nearby Echo Key Beam system to lower the gate and destroy the Echo Key Beams.

This organic door appears in Corruption. They appear in Leviathan Seeds, and have a bone plate that retracts when shot.

More or less a hatch, Anthony Higgs is ordered by Adam to destroy this door and let the Lava flow. Samus destroys it with her Super Missiles.

This door is a small hatch that only the Morph Ball can access. It appears in multiple games in the Prime Series.

This organic door appears in Corruption. It is a maw and appears only on Phaaze, hence the name, and is similar to a Leviathan Door.

This door appears in Metroid Dread and react to Samus's presence. They lock when she is visible to the naked eye, forcing her to cloak herself and slowly walk through them.

This door appears in Hunters. It looks like a typical door, but with a spinning red lock on it. They behave exactly like Blast Shields.

This appears in most 2-D Metroid games, but is different from actual doors. Shutters are triggered to open or close when a switch or a certain location is shot.

This door appears in Hunters. Arguably the largest door in the Metroid series, it has an electronic force field and behaves like any normal hatch. When shot, the color will dull, and it will slowly open. It most resembles a Leviathan/Phaaze Door.

This door appears in Echoes. It is a gate with a hologram of a message written in Luminoth (that reads GATE), and must be opened by scanning it. As Samus continues on, she will have to continually upgrade her Translator Module to read the hologram, which is in different colors (violet, amber, emerald and cobalt).

This door appears in Echoes. It appears to be a Luminoth-made door, as it only appears if Samus tries to leave the area she is in without returning the Energy to the Energy Controller, or if, in the Great Temple, she tries to avoid speaking to U-Mos.

There are two unique doors in the original Metroid that require 10 Missiles to open. The Yellow Door[1] appears in Tourian at the bottom of the first shaft, while the Purple Door appears in Ridley's room, blocking the way to the reliquary.

Appearing primarily in Metroid Fusion, it is simply a door without any hatch or covering on it. Samus can easily walk though these doors without the need of firing her weapons (these doors are usually asociated with Shinesparking).

Appearing in Metroid: Samus Returns and Metroid Dread, these unpowered doors require the Charge Beam to power up and open, hence its name.

Appearing in Metroid: Samus Returns, the Taramarga is a purple door-blocking creature that is equipped with a large rock as a defensive measure. The obstruction can be bypassed using the Wave Beam to hit the creature directly.

Appearing in Metroid: Samus Returns, the Gigadora is a purple three-eyed door-blocking creature. It can only be destroyed with simultaneous shots to its eyes, which the Spazer Beam can accomplish.

Appearing in Metroid: Samus Returns, the Gryncore is a green door-blocking creature possessing a sturdy shell that is impervious to all but the Plasma Beam.

Appearing in Metroid Dread, E.M.M.I. Zone Doors lead to the aforementioned E.M.M.I. Zones. Unlike traditional doors, Samus can simply walk through them without the need to fire first. If Samus is seen by an E.M.M.I., it will lock the doors and force Samus to flee until it gives up its chase. The doors also lock for a few seconds after Samus leaves the E.M.M.I. Zone. Once the E.M.M.I. in the zone is defeated, the doors remain open permanently.

"A weak energy shield surrounds the door to keep out roaming creatures. Any weapon will open this door."

LOCKED DOORS
"There are many types of doors that require a certain weapon or ability to unlock. If you don’t have the means to open them yet, remember to return when more fully equipped. (Or see if you can find another way.)" 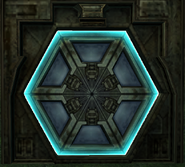 A door on Tallon IV 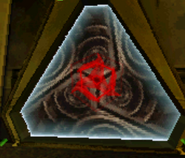 A Sealed Door in the Alimbic Cluster 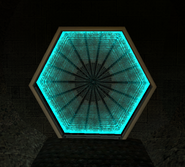 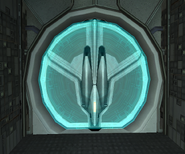 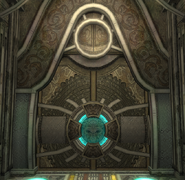 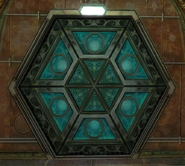 A door created by the Chozo on SkyTown 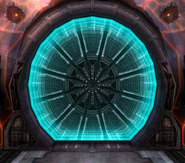 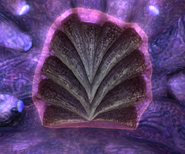 A "door" found on Phaaze