Dragüd's ship is a large metal craft with insect-like legs. It carries his Space Pirate minions, including Doruba, and has an "ultra high powered spy camera", as well as a research lab and throne with a rug pelt for Dragüd himself.

It was destroyed when the onboard Megaroid escaped and siphoned the energy directly from the ship, much to Dragüd's surprise. 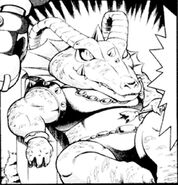 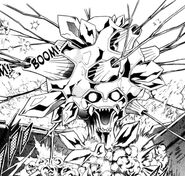