Access to Central Dynamo, battle with an Elite Pirate

Dynamo Access is a room in the Phazon Mines in Metroid Prime. It is a long tunnel with an Elite Pirate kept in stasis, that can break out on later visits.

A long hallway connecting the Central Dynamo and the Omega Research rooms. Power likely flows from between these two rooms into here. A single Elite Pirate rests within this room as Samus travels through here and back. When she returns to this room with the Plasma Beam obtained and as Samus travels closer to the Central Dynamo, a sudden power surge shakes the room and parts of the roof explode. This sudden power malfunction causes the doors to lock and the Elite Pirate to awaken and Battle Samus.

The Elite Pirate in this room does not wield a Plasma Artillery Cannon like the rest, it is possible the Pirates didn't have time to install it or there may have been a short supply. It will only resort to its usual shockwaves, Beam absorption and close range tactics, the last of which can be utilized frequently given the small room Samus is fighting in. Although it won't follow Samus if she bunkers herself near a White Door, it may still be able to hit her with its shockwaves (which travel through walls) and with ease as the area near the doors provides much little space to jump over. Besides the lack of a cannon and the very little room to maneuver in, the same tactics of concentrated fire will work to defeat this Elite Pirate.

If quick enough, it is possible to stunlock the Elite Pirate at the beginning of the encounter as it breaks out by walking around its back while locked-on, then circling around its back as it tries to turn around to locate Samus in its sights (it clenches its hands for a moment when it locates Samus before it attacks). Should Samus continues to escape its view by circling around it and firing uncharged shots at it simultaneously, the Elite Pirate can be easily defeated without it ever having a chance to fight back (firing Charged shots causes knockback, which may cause the Elite Pirate to locate Samus).

Panel
"A nearby energy flux has caused a malfunction in this panel." 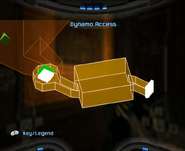 Room seen from the Map 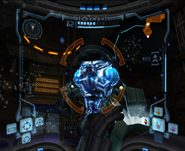 Samus battles the Elite Pirate within this room.
Русский
Community content is available under CC-BY-SA unless otherwise noted.
Advertisement