The electronic junkyard[1] is a damaged room in Sector 5 of the Biologic Space Laboratories research station. It appears in Metroid Fusion. This is where the Nightmare bio-mechanical creature is fought and defeated.

The junkyard is a large, vertical room at the very edge of Sector 5, outside of the cold environments. The background appears to be composed of scraps of dark green metal, machinery and blue and magenta cables. What caused this mess is unknown, although it should be noted that some of the pieces resemble portions of Nightmare's arms.

The left wall features two doors, one of which has been smashed in and cannot be used. The floor is metallic and separated into panels. It is very likely that Nightmare was the cause of its destruction. The other appears at the very bottom and is locked on Samus's first visit to the room. In between the doors on the wall is a ladder. Samus enters the room via Pit Blocks in the ceiling from the previous room.

Descending into the room, Samus will find it empty. After a few moments, Nightmare appears from the bottom, with a noticeable growl and earthquake. Samus battles it by engaging its gravity manipulator, which is eventually destroyed along with its faceplate. Samus then takes to the ladder on the wall and assaults the creature's face with Missiles. It sags and discolors, before the creature is killed and the Core-X emerges. After Samus destroys its casing, she absorbs the Core-X itself and recovers her Gravity Suit.

To pass the next room, Samus will need to return to the junkyard and then run back through the door to penetrate a wall of Boost Blocks. This room is close to the underwater portion of Sector 4, which Samus is tasked with visiting after destroying Nightmare.

The Gravity Suit in X form.

Samus after recovering the Gravity Suit. 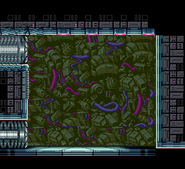 The unused copy of the room in Sector 6 (NOC), which has slight differences compared to the final one used (aside from being moved and used into Sector 5 (ARC)).