Elite Control is a room in the Phazon Mines. It appears in Metroid Prime.

This is where Samus first encounters an Elite Pirate and Ice Troopers (unless Samus re-entered Mine Security Station before entering this room). When the Elite Pirate dies, it will release shockwaves that will destroy the Force Field covering the path upward, and alert the Pirates in the room to Samus's presence.

The room is filled with computer screens, which include 8 Pirate Data entries. The second floor has a door blocked by a Force Field, this time controlled by an Interface Module.

Computer screen
"A shipment of military-grade Plasma Artillery Cannons is en route to Tallon IV.
The Egenoid Star Marines we 'acquired' them from were letting them sit in a warehouse. Our Elite Pirates, on the other hand, will put them to good use very soon."

Computer screen
"Consumption of Elite Nutrient Mix by non-Elite units is strictly prohibited.
Failure to comply will result in a 50% ration reduction for a deca-cycle."

Computer screen
"Security Level Tau will be in effect until further notice. All leaves cancelled pending downgrade of alert status."

Computer screen
"Bioform Samus Aran continues to assault our holdings on Tallon IV.
Security has been compromised in multiple areas. Casualty rates are rising. Command has authorized a sizable bounty for the capture or termination of Aran. Report to your field officers for details."

Computer screen
"Evaluation of Plasma Artillery Cannons is complete.
The weapons are fully functional, but a flaw has been discovered. Subpar thermal shielding gives them a high heat signature. This could make them easier to target for enemies with enhanced vision capabilities."

Computer screen
"Security Alert. Computer systems compromised.
Bioform Samus Aran has cracked our systems. The Hunter can access our system at will, and is able to bypass most of our security programs. Use manual locking systems when possible."

Computer screen
"Metroid aggression levels are rising.
Be alert for any attempts by Metroids to escape from Quarantine areas. Their energy absorption ability is not able to disrupt our Force Fields, but continued exposure to Phazon may change things for the worse."

Computer screen
"Reports on Hunter activity are in.
Analysis indicated that the Hunter is using 'Morph Ball' technology to infiltrate our facilities. Recalibrate sensors to search for Morph Ball energy signatures."

Computer screen
"Report any signs of ration rejection by Elites at once."

Computer screen
"Reconfiguration of Security Drones authorized.
Deploy new Drones to mission-critical areas immediately."
Computer screen
"Planetary stealth technology is back online.
We have evaded detection by the battle cruiser Emmons. The brief lapse in planetary security caused by the crash of our frigate is over. Now we can concentrate our efforts on the Hunter."

The Hunter
"Log 10.023.7
Security Command issued an all-points alert after the fall of Zebes. The alert concerns bioform Samus Aran, also known as the Hunter. Subject is a female hominid, and is heavily armed and extremely dangerous. Subject uses a powered armorsuit of unknown design in battle, along with a number of potent Beam and concussive weapons. All combat units are instructed to terminate Aran on sight, preferably in a fashion that will allow salvage of her powered armorsuit and weapons. A considerable bounty will go to the unit who delivers Aran to Command. Dead or alive, it matters not."

Hunter Weapons
"Log 11.222.8
Science Team is attempting to reverse-engineer Samus Aran's arsenal, based off of data acquired from her assaults on our forces. Progress is slow, but steady. Command would dearly enjoy turning Aran's weapons against her. We believe we can implement Beam weapon prototypes in three cycles. Aran's Power Suit technology remains a mystery, especially the curious Morph Ball function. All attempts at duplicating it have ended in disaster; four test subjects were horribly broken and twisted when they engaged our Morph Ball prototypes. Science Team wisely decided to move on afterward."

Chozo Studies
"Log 11.440.4
Results are in from field studies on extinct bioform group Chozo. We believe that Tallon IV was once a stronghold in a great Chozo empire, brought low by the meteor strike. Planetary devastation brought an end to the Chozo, yet remnants of their society remain. We are studying these relics in an attempt to harness their power. What is of no use to us, we destroy. In time, we shall have all we need from this dead race, and shall wipe this planet clean of their ugly Ruins. The dead should serve the living, not hinder them."

Chozo Ghosts
"Log 11.664.2
There have been numerous incidents involving spectral entities at Chozo Ruins sites. Several personnel have been assaulted by these Chozo Ghosts; few have survived. Survivors speak of swift attacks from nowhere, brief sightings of the enemy, then nothing, only to be followed by another attack. Science Team believes these attacks are in response to our efforts to recover Chozo relics and Artifacts. Somehow, these entities are able to interact with the physical world, and it appears they wish to keep their Artifacts to themselves. We will make them pay for such arrogance, for even ghosts can be destroyed."

Metroid Prime
"Log 11.156.9
Test subject Z-d, hereafter referred to as Metroid Prime, was recently discovered in a cavern by mining crews. It quickly dispatched the miners, but was eventually contained by security units and drones. Once contained, we were able to begin studies upon Metroid Prime. The results have been astonishing. It is genetically similar to Metroids, albeit on a highly evolved level. It displays a limitless capacity for Phazon infusion and shows no Phazon-based degeneration whatsoever. It continues to grow in size, and while it has manifested some psychotic behavior, the cold fields we use to pacify remain effective. Authorization for advanced studies on Metroid Prime have been approved."

Prime Breach
"Log 11.377.1
Subject Metroid Prime's breach has been contained. Reports indicate that it sensed a large batch of raw Phazon in the lab from within its stasis tank and broke through the glass, using previously unsuspected strength. Besides consuming all of the Phazon, Metroid Prime assimilated several weapons and defense systems from fallen security units. It has suffered no ill effects from said assimilation; indeed, it began to use its newly acquired weapons against us. Once we pacified it, we were unable to remove the assimilated gear without threat to Metroid Prime — the gear is now an integral part of its body. Command is intrigued by this newfound ability, and has ordered further study to commence at once."

Prime Mutations
"Log 11.402.5
Metroid Prime continues to feed and grow ever larger in the impact crater caves. Its hunger knows no bounds, and it has begun to manifest unusual mutations since its breach. These include armor plating on its epidermis and mechanical outgrowths that generate defense screens. These screens render it invulnerable to most weapon systems, but a flaw in the mutation leads to increased vulnerability to certain weapons. It compensates for this by shifting the screens quickly. This latest development concerns Security units greatly; they feel it's a matter of time before Prime corrects this defect and renders itself invulnerable to all weaponry. Containment would be nigh impossible if this were to occur."

Chozo Artifacts
"Log 11.452.8
We are particularly interested in a number of curious Chozo Artifacts we have been able to recover from a number of religious sites on Tallon IV. These relics resonate with power, and yet we are unable to harness them in any way. Science Team is attempting to fuse them together with Phazon, believing that a link might exist between them. We know that these Artifacts are linked to the Chozo Temple that blocks full access to the Impact Crater. We have yet to crack this enigma, however. Command grows impatient regarding this matter; results must be produced soon."

Impact Crater
"Log 11.156.9
Investigations into a possible ingress point for the impact crater continue to meet with failure. The shield of strange energy that protects it is impermeable, and all attempts to tunnel past it have proven fruitless. Our continued futility in this matter is made all the more significant in light of the recent life form readings we've discovered emanating from deep within the crater. Analysis of the readings indicates that a massive creature is gestating there, absorbing enormous amounts of Phazon from the Phazon core at the heart of the impact crater. This discovery makes accessing the crater doubly important - not only will it open the door to the vast deposits of Phazon within, but it will also lead us to this creature, whatever it may be."

Gate System
"Log 11.377.1
Analysis continues on these cursed ruins and the Chozo temple that hovers near them. We are now completely certain that the containment field denying us access to the impact crater is linked to strange artifacts that belong in the temple...but we are no closer to finding them or deciphering the riddles that seem to cover every wall of this ruined place. Command grows increasingly anxious for a resolution to this matter, so we must redouble our efforts. X-ray squadrons will begin terrain sweeps within days - until they begin, patrols are instructed to report any and all architectural anomalies to their commanders."

Artifact
"Log 11.402.5
We have come to another dead end. It is clear now that we will never discover the locations of the Chozo's artifacts until we can decipher the messages carved into the statues in this abominable temple. Our language databases are woefully inadequate, and our linguistic analysts can come up with little more than vague theories. The best hypothesis that we can offer is that finding artifacts will require items spiritually linked to the Chozo civilization. However, without these items, we are lost, and Command grows more impatient by the day. Results must be produced soon."

The Key
"Log 11.452.8
Although we are still no closer to finding the artifacts of the Chozo, we have at least produced a viable hypothesis for their function. It appears that each of the artifacts corresponds to one of the statues on the temple platform, and that each one acts as a small key to a huge lock. Judging by the number of statues, we assume there must be twelve artifacts. Once we find the resting spots of all twelve, we can bring them here, unite them with their statues, and open the gate system at long last. Once we do, the impact crater - and whatever creature it shelters - will be ours for the taking."

Samus encounters the first Elite Pirate in the Mines.

Samus defeats the Elite Pirate, causing a surge of electricity to deactivate the force field. 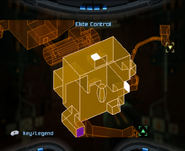 Model of the room seen from the Map.
Русский
Community content is available under CC-BY-SA unless otherwise noted.
Advertisement