Killed by Samus Aran during her visit to Aether

The Emperor Ing was the main antagonist and penultimate boss in Metroid Prime 2: Echoes. The eldest and strongest of the Ing, as well as leader of the Ing Horde military government, it resided in its personal Sanctum within the depths of the Sky Temple, from where it presumably gave orders to its troops. The Emperor was the very first Ing born after Dark Aether's creation, but was since mutated and strengthened by Phazon energy; it later empowered itself further with the stolen Light of Aether during its battle against Samus.

The Emperor was capable of manipulating both dark and light energies to create devastating attacks.

In its first form, the gigantic Emperor Ing consists of a large, spherical head atop a stalk-like, stationary body. Samus can scan the Emperor's Body, Head, and Eye separately. To defeat the Emperor's first form, Samus must find a way to expose the creature's single eye, which is its only vulnerable weak point. In order to bring down the Emperor's defenses, Samus must first deal with its tentacles, which it uses to attack Samus in various ways. The Emperor will try to whip Samus into the Phazon that lines the arena where it is fought by swinging its tentacles around. The Emperor can use its tentacles to charge up and launch powerful dark energy spheres at Samus. It can also create miniature portals, through which it jabs its tentacles in an attempt to impale her. However, destroying a tentacle often leaves behind a power-up.

After Samus causes the Emperor to retract all of its tentacles, the creature's eye, which can be scanned separately from the rest of its body, will be temporarily exposed. The eye has two protective hemispheres rotating around it, and Samus must fire through the narrow break between them. Samus must lock onto and maneuver around the eye, as the protective hemispheres rotate around it constantly, alternating their direction erratically.

While its eye is exposed, the Emperor can fire a powerful laser from it, which can stun Samus and prevent her from shooting. This particular part of the battle is reminiscent of Spore Spawn from Super Metroid, where the boss's weak point is exposed for only a brief period of time. Eventually, the Emperor Ing will regenerate a protective covering for the eye, and sprout new tentacles. Throughout the battle, the Emperor Ing regrows its tentacles in varying numbers, until Samus finally deals enough damage to the Emperor's exposed eye. Any weapon can damage the eye, though the Sonic Boom seems to deal the most damage.

In its second phase, the Emperor encases itself in an impermeable, magnetically-charged shell reminiscent of a Luminoth Energy Controller or an Ingclaw. This cocoon-like incarnation of the Emperor is covered in circular vents that immediately begin to expel a poison gas at the start of the battle, forcing Samus to scale the cocoon with the Spider Ball in order to avoid the purple fog covering the floor. In this stage, the Emperor is undergoing metamorphosis, and Samus, unable to cause any real damage to the pupating Emperor inside, must destroy the 11 vents on the cocoon. This can only be done by damaging the tentacles that emerge from within the vents as Samus draws near them, a difficult task to accomplish, as the tentacles whip around viciously and can actually dislodge her grip on the cocoon's surface. To make matters worse, Inglets in their liquid forms also emerge from the chrysalis and follow Samus around, often ganging up on her in groups. Samus must employ her Bombs to destroy the tentacles that emerge and fight off the Inglets that relentlessly attack.

The Inglets and tentacles are a blessing in disguise, as destroying these yields bountiful health and ammunition. Samus can use this time to fill up on much-needed health using Power Bombs to destroy multiple nuisances at once. It is possible to delay or speed up the Emperor's pupating process by strategically choosing when to bomb the vents from where tentacles emerge. As Samus destroys more tentacles, the vents begin to release more gas into the room, causing the height of the toxic, purple cloud to fluctuate and making anything beneath it extremely hard to see. At points, the gas rises to such a high level that only the small area near the cocoon's top is left uncovered. If Samus waits here for the miasma to recede, she will be safe from its damage, but will become easy prey for swarms of Inglet.

Once all 11 tentacles have been destroyed, the shell of the chrysalis breaks open, and the Emperor emerges in a mutated form.

In the Emperor Ing's final form, its orange glowing heart has become unstable due to increased exposure to Phazon and the Light of Aether, exposing it in the open. However, the extreme physical mutations have given the Emperor far more mobility than its previous forms; in this form, it is more arachnid-like in appearance and bears a resemblance to a giant Warrior Ing with three large horns resembling a crown. With a new health bar, the Emperor Ing's only weak spot is its very large heart, located inside a mouth-like opening barely covered with strands of black flesh which it can open and close at will.

The Emperor Ing can use a large variety of attacks and abilities, though a few select ones are only available when the Emperor's heart is in specific polarities. While its heart is purple, it can create a powerful beam of dark energy from the tip of its crown that freezes on contact, as well as creating dark puddles on the floor with its foremost leg that spawns Nightbarbs. When its heart is white, its crown can project a large beam of light energy that ignites Samus on fire, and the Emperor can also spawn LightSwarms from its mouth-like orifice in a "spitting" motion. Both Nightbarbs and LightSwarms provide protection by flying around the Emperor's main body, making it difficult for several of Samus's attacks to breach through their large numbers; some of the creatures are consumed by the Emperor to recover health. Like the Inglets from the previous phase of the battle, the spawned enemies can be destroyed for plenty of pickups, preferably with attacks containing a large blast-radius, such as the Sonic Boom.

All other attacks the Emperor Ing possesses can be used regardless of its heart's color. When its entire body crouches and shakes, it is either preparing to employ a shockwave-inducing jump similar to the Jump Guardian, or create numerous rifts nearby that will each simultaneously shoot out a light energy beam reminiscent of the Warrior Ing's transdimensional energy. It will also try to skewer Samus with its three front legs covered in dark energy if she is close. Each time the Emperor Ing's health is lowered by approximately 1/3, it will close its mouth and shake from side to side as its emits a humming noise that increases in volume; this event lasts for a short moment, but it signals the addition of a new attack it will be using throughout the battle. The first one involves the Emperor rushing towards Samus while it tramples the floor violently, forewarned only by a long roar as it slowly stretches its mouth open. The second one involves the boss quickly sliding across the entire room with its legs; this is foreshadowed by the creature stomping the ground twice in a row in large motions, and it occurs only after the trampling attack. The slide attack is extremely fast and hard to avoid, but if Samus manages to dodge it, the Emperor will run into a wall where it will stand still for a moment, revealing a small hole on its back that can be targeted since it leads to its heart. The hole is most accessible when the Emperor Ing raises its foremost leg to the level of its maw.

When the Emperor Ing's heart is orange, its health bar cannot be reduced, serving as a sort of barrier. Thus, Samus must force the Emperor to change its heart's polarity in order to damage the boss. To do this, she needs to bring down the orange barrier by hitting its glowing organ with any combination of weapons, though Super Missiles are the best option since they do not consume ammunition from beams capable of harming the boss. Once its heart changes, it becomes vulnerable to a beam of the opposite polarity: when the heart is white, it is vulnerable to the Dark Beam, and when it is purple, it is vulnerable to the Light Beam. If Samus has collected enough Beam Ammo Expansions, the Annihilator Beam is her best choice, as it can hurt the Emperor in both polarities. After a while, the Emperor will bring the barrier back, reverting its heart to orange and repeating the process. As the battle progresses, the boss will start to rapidly switch between light and dark polarities whenever the barrier is down in an attempt to make Samus's beams hit the same polarity, causing no damage. When the fight nears its end, the heart will glow increasingly brighter, making intense rays shine through the thin dark strands that connect the top and lower portions of its maw.

When the Emperor Ing's health bar is entirely depleted, it dies, exploding into purple particles and smoke. The creature yields the last Light of Aether for the Main Energy Controller. When Samus absorbs it, Dark Aether loses its stability and begins to collapse, giving her a few minutes to escape before the planet is eradicated.

Morphology: Emperor Ing Body
Ruler of the Ing Horde.
Target is drawing energy from the unstable Energy Controller. Eliminating target's connection to the energy may be an effective strategy.

Bioscans indicate that this is the eldest, strongest Ing in the Horde, the alpha and the omega. It has absorbed enormous amounts of Phazon energy into its body, mutating itself in the process. Apparently this power is not enough for the creature, as it is now siphoning energy from the final Energy Controller.

Morphology: Emperor Ing Head
Ruler of the Ing Horde.
Target will form numerous tentacles to defend itself. Eliminate them to weaken its defenses.

Like its brethren, the Emperor Ing is a metamorph. It has molded itself around the precious Energy Controller, and will defend it to the death, using its own body as a shield and weapon. Destroy the tentacles it generates to weaken the creature and its defenses.

The Emperor Ing has exposed its main eye, from which it can fire powerful energy beams. It is protected by an energy shield, although not completely. The eye can be locked onto, but only direct shots will get past the shield.

The heavily damaged Emperor Ing has entered a regenerative state inside a durable healing shell. Tactical scans have detected eleven weak points on the magnetically charged shell: Spider Ball travel is possible on the shell surface. Damage the weak spots with explosives to crack the shell and expose the enemy within.

Morphology: Mutated Emperor Ing
Altered ruler of the Ing Horde.
Further Phazon mutation of the Emperor Ing has occured. The creature seems to only take damage when its heart is Light or Dark. Find a way to change the heart to one of these colors.

Further exposure to Phazon has mutated the Emperor Ing. It is now capable of shielding its vulnerable areas with energy barriers. Beams of opposite polarity can damage these barriers, however. Heavy damage to these barriers will cause them to drop, exposing the creatures weak spots. Target the weak spots to immobilize and damage the enemy.

Further exposure to Phazon has mutated the Emperor Ing. The creature's energized heart is unstable. Beams of opposite polarity can damage the heart. Overloading the heart with energy may cause it to exceed critical mass. 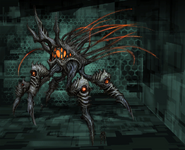 Samus frozen by the Emperor Ing.