The entrance to Tourian is a room in Brinstar. It appears in Metroid and Metroid: Zero Mission, with significant differences between versions. This room is no longer present in Super Metroid, and has been replaced with another chamber in Crateria that leads to the new Tourian.

In the original Metroid, this room is found on the top left of Brinstar, and can be accessed as soon as Samus has Missiles. It initially appears as a small chamber with two opposite-facing ledges suspended over a pool of acid. Two Stone Statues depicting Kraid and Ridley are present above the gap, displayed on pedestals. When the bosses are defeated, the pedestals can be shot, causing them to rise and a bridge of Fake Blocks to form above the acid. This allows Samus to access the elevator to Tourian.

While in the normal course of events the defeat of Kraid and Ridley is required to activate the bridge in this room, it is possible to bypass defeating the bosses and go straight to Mother Brain in the original Metroid. To do so, Samus must lure a Reo from the adjacent corridor above the acid, freeze it under the opposite ledge, and use it as a platform. She can then Bomb Jump from it to the other side of the room.

In Victory Techniques for Metroid, the manga strategy guide for the game, Samus mistakes the statues for the real Kraid and Ridley and shoots them after being surprised. She is relieved to discover moments later that they are only statues.

In the remake, Zero Mission, the room's appearance has been changed. It is now a corridor in a green rocky cave, with tall vine-like plants in the background. The acid has been removed, and the Stone Statues replaced by large busts of Kraid and Ridley. Given this change, the Sequence Break from the original game is now impossible, and the bosses must be defeated to open the path to Tourian. On Samus's first visit to Corridor No. 2, she is forced to visit the entrance to Tourian before she can progress in the other room.

When Kraid and Ridley are defeated in their respective lairs, a cutscene plays that shows the eyes in each of their busts glowing. The camera in these cutscenes pans from below the floor of the room, which shows that it is longer than it appears in gameplay. When Samus enters this room and approaches the busts, the doors lock and the busts' mouths open. Once they have fully opened, the doors unlock, allowing Samus to continue to Tourian.

028 BUILD A BRIDGE (page 135)
"The entrance to Tourian is at the top of Brinstar. Statues of Kraid and Ridley rule over a wide gap. If you have defeated the beasts, the statues will be flashing. Hit them with Beam blasts to make them rise and produce a bridge that spans the gap."

010 HATCH AN ESCAPE PLAN (page 30)
"Run to the left to discover the two-headed statue that blocks the way to Tourian, then return to the hatch."

200 TAKE OFF FOR TOURIAN (page 73)
"Climb to the top of the left shaft, then run to the left. After you recharge at the Chozo Statue, continue left to the Kraid and Ridley busts (shown as flickering flames on your map screen). The mouths will open, giving you elevator access."

The guide's walkthrough for the original Metroid features the same passage about this room from the Metroid Prime guide, copied nearly verbatim. The only difference is that the final sentence ends after "bridge", and "Beam" is not capitalized.

Full view of the room in Zero Mission.

The lower half of the room, not visible in gameplay. 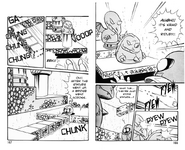 The room in Victory Techniques for Metroid.

This room also makes a brief appearance in Famiken Ryu.
Community content is available under CC-BY-SA unless otherwise noted.
Advertisement