Missiles, Charge Beam, or Shinespark to its vulnerable head

Thawing Cataris and Artaria
Experiment No. Z-57 is a boss in Metroid Dread.

Experiment No. Z-57 is a large monster vaguely reminiscent of a lizard with insectoid features. Most of its body is black or very dark red, save for its claws, spikes, and its twisted, skull-like head. Its red flesh and an exposed ribcage on its underside contribute to its visceral appearance. Multiple yellow-orange eyes are scattered over its head, and its tripartite jaws are lined with jagged, tooth-like protrusions. It has six limbs: two are spike-lined tentacles that serve as its main means of locomotion and physical combat, while the other four have distinctive joints and four hooked claws on their ends. In its original state, Z-57 has a black shell on its backside and a hooked stinger-like tail.

Experiment No. Z-57 has notable physical similarities to Corpius, with a very similar head and a similarly exposed ribcage, but their exact relation is unknown. Considering its name and the Chozo Archives, it is presumably one of the Mawkin tribe's artificial bioweapon experiments instead of a natural bioform. Its shell, tail, and red flesh are also similar to that of Chozo Base Asset 04, another specimen of the Dairon laboratory, which seems to imply a connection between the two experimental creatures.[1]

When infected by a Core-X, Experiment No. Z-57's features are dramatically altered to make it much larger and more monstrous, although it retains the same basic characteristics. Its shell is gone, exposing even more visceral flesh with several long spikes dotted around its body and what appears to be a long tail, which it may use for propulsion or support when moving. Its six limbs are considerably elongated, with its clawed limbs able to be folded against Z-57's body when unneeded; their positions have also shifted in a way that it seems to lack any hind limbs. Furthermore, the thermal generator's room is caked with more flesh that appears to be an extension of Z-57's form, as evidenced by its disintegration following the creature's defeat.

An image in the Chozo Archives indicates that Quiet Robe had been directly involved in the experiments that created Experiment No. Z-57, most likely under Raven Beak's orders. Z-57 is first seen being experimented on in the background of a blacked-out room in Dairon; it can be seen in greater detail once Samus Aran turns the power back on. While the machinery operating on Z-57 still appears to be partially functional, the experiment remains unresponsive save for occasional twitching and does not react to Samus's presence.

Later in the game, after the X Parasites are released from Elun, Experiment No. Z-57's body vanishes from its room in Dairon. It is revealed to have been infected by an X before heading to Cataris, disabling the thermal generator in an effort to freeze the entirety of ZDR. Using her Gravity Suit to endure the sub-zero temperatures, Samus makes her way to the generator, finding it covered in strange slime that prevents its parts from moving. Moments later, Z-57 appears from above the generator and attacks her.

Upon its defeat, Experiment No. Z-57 collapses on the edge of the main platform, allowing Samus to force it off with several charged Arm Cannon shots. The monstrosity pulls itself up long enough to grab Samus in its claw, intent on dragging her with it; instead, Samus shoots it in the mouth once more, leaving it to plunge off the edge alone. Z-57 briefly reverts to its Core-X form before sinking in the lava below; Samus pulls herself up the ledge to see its slime disintegrate from the generator, allowing it to resume functioning.

Samus must shoot at Experiment No. Z-57's head to damage it, which is made more difficult by the boss being the only foe in the game who can briefly retreat into the background during certain moves. It attacks by sweeping the room with a beam of pink plasma; Samus must wait for it to pause in its sweep and jump to the other side of the room before it resumes firing, being careful not to touch the residue left in seemingly random patches in the beam's wake. The beam can be fired in two different configurations: it can go from the opposite side of the screen and cover almost all of it before stopping, or it can be stopped early and be resumed again shortly afterwards to blast the remaining section. As such, Samus will have to watch when the beam dies down to make her escape. It also swings its tentacles at Samus, once from one side and then from the other, requiring her to stay in the air near the opposite corner of the room from where the swipe is coming from. During this move, it cannot take damage.

After being shot in the head several times, Experiment Z-57 will slam a tentacle on one side of the room and fire a beam along the ceiling and the opposite wall, forcing Samus to move near its head to avoid damage. Should she dodge the laser, the creature will attempt a bite which can be Melee Countered to make Z-57 vulnerable; hitting it during this point will initiate a Grab Sequence that gives Samus an opportunity to scale across its tentacle and mount its head, forcing it to retreat to the thermal generator and rampage around it in an attempt to shake her off, as Samus fires all the while. After a full loop of the device, Z-57 throws Samus off of its head; she uses her thrusters to land safely back in the battlefield as the boss leaps back to re-engage.

As its health dwindles, Experiment No. Z-57 will enter its second phase and use new attacks. It can grab the walls and ceiling with its auxiliary limbs, bracing itself for a targeted energy blast while slowly restoring its health.[2] A blue reticle will follow Samus around for the full move, and should she stay in it for too long, Z-57 will fire a ball of energy towards her (it is still slow enough to be dodged even after the move successfully aims at Samus), and the attack can be interrupted by shooting the limbs (preferably with the Storm Missile), destroying them permanently and preventing it from using the attack for the rest of the battle; if Samus acquires the Screw Attack early via Sequence Breaking, it can also be used to destroy Z-57's claws. After its two tentacle sweeps, it will also perform a double swipe with both of its tentacles along the upper parts of the ceiling before covering much of the ground floor, forcing Samus to time a jump in the center of the arena to avoid damage. Its most elaborate attack fires its beam at the right wall, activating powerful fans that blow powerful wind at Samus, forcing her to run to stay in place, and fires waves of crescent-shaped projectiles at Samus; she must jump through gaps in the waves to avoid being pushed into the damaging residue that appears on the left wall. The pattern of fired shots is the same every time. Z-57 is left winded after this attack, allowing Samus to get some free shots in before the fans die down; alternatively, she can prepare a Shinespark, which can instantly defeat the creature if she can hit its head.[2] If Samus Shinesparks underneath the Experiment, the camera will zoom in on her.[3] 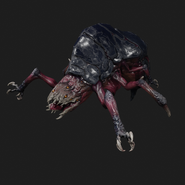 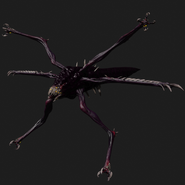 Experiment No. Z-57 atop the thermal generator.

Laser fired at the floor, with residue.

Z-57 readies an attack, which can be countered.

The start of the Grab Sequence.

Z-57 swiping with both arms.

Samus finishing the beast off.

Dragging Samus down with it.

Falling into the lava.