Wikitroid
Register
Don't have an account?
Sign In
Advertisement
in: Articles with non-canonical information, Rooms, Frigate Orpheon,
and 2 more
English

Exterior Docking Hangar (外観ドッキングハンガー, Gaikan Dokkingu Hangā?) is an area in the Frigate Orpheon in Metroid Prime. It is the first room explored in the game, the first in the Prime series, and the first Metroid room in 3-D. The Exterior Docking Hangar is where Samus Aran lands her Gunship. To proceed into the frigate, Samus must deactivate two force fields by shooting a number of switches. The second set must first be activated by scanning an Interface Module attached to a central pillar. The hall that the door leads to is considered part of the hangar in the game's map.

At the end of the escape sequence caused by the destruction of the Parasite Queen, Meta Ridley is seen at the hangar; Samus attempts to follow him in her gunship but loses track of him and lands on the nearby planet, Tallon IV.

The room is not encountered while exploring the Orpheon wreckage after it crashed into the Tallon Overworld, and was possibly destroyed.

to lock onto targets."

"The next set of Force Field controls are offline.
Scan the central pillar to activate them.
Press

to switch to the Scan Visor./Move cursor into the top zone and release

to scan a target."

to return to the Combat Visor."

to open doors.
Once shot, doors will open when you approach them." 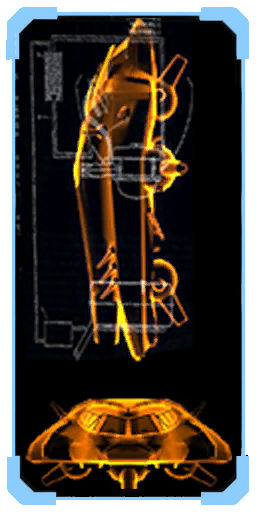 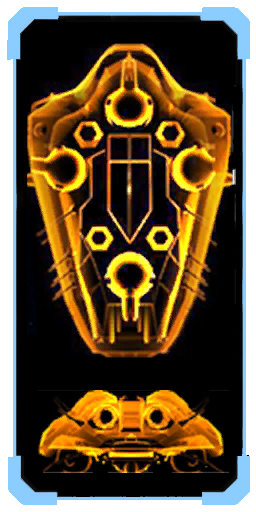 Energy Force Field in place. You cannot reach your gunship.

This Force Field blocks the entrance.

Something nearby must be able to deactivate it.

This Force Field blocks the entrance.

You cannot deactivate the Force Field unless the switches are red.

This switch is directly connected to the Force Field barrier.

This switch does not seem to be operational.

The control panel on the pillar in this room can turn it on.

In the game's files, a scan entry is associated with the meteors seen flying above the room. However, the meteors cannot actually be targeted with the Scan Visor, so the scan cannot be read in-game.

Clark Wen recalled Shigeru Miyamoto playing a demo of Prime during development, and enjoying the ambience in the Exterior Docking Hangar. His feedback gave Wen the confidence that his approach to the sound design of Prime was the right one.[1]

According to Jack Mathews, the tutorial in this room was important for new players since "there weren't that many twinstick games back in this day".[2]

The Exterior Docking Hangar on the game's map.

The Meteors (and the Frigate) seen through the Thermal Visor (via hacking).

The Exterior Docking Hangar seen through the X-Ray Visor (via hacking).

Samus turns to see the Frigate exploding behind her.

The hangar during the frigate's destruction.

Samus runs back to her ship.