The EyeballBlocker[1] is an unknown Door-like species seen a single instance in Metroid Prime 3: Corruption. It appears in the Metroid Cavern room on Phaaze, blocking the first half of the room with an exposed membrane, and the second half with numerous Phazon Hopper hives. To destroy it, Samus has to shoot at any one of its five antennae when they are periodically revealed, causing the plating covering the large eye to retract, leaving it exposed to direct hits. Alternatively, Samus could use the Hyper Ball for a more effective kill, or use a fully-charged Hyper Beam blast to hit an antenna and the door with one Charge. This requires good timing, however.

"Creature's optical organ is vulnerable to shots, but is being protected by thick plating."

"Protective plating has retracted, and the optical organ is exposed. Vulnerable to all types of attack."

"Plating protects antennae. Only when the plating is open will the antennae be vulnerable." 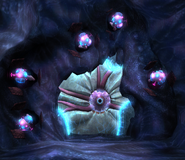