Dormant until disturbed by local movement

Sensitive to light; beam weaponry will stun them, the Charge Beam can destroy entirely.
Eyons are immobile, energy-producing organisms that can be found on walls and ceilings throughout Tallon IV, mainly in the Chozo Ruins.

Eyons produce a focused energy beam which moves and will do minor damage if Samus comes into contact with it. Why it produces this beam, other than to hinder movement, is a mystery. If any form of weaponry is fired near or at the Eyon, a membrane will close over its "eye" and disrupt the energy beam. A charged shot can destroy it completely. A Power Bomb or charged Plasma Beam shot will cause them to incinerate as well.

It is possible that the Eyons are not biological organisms at all, but cybernetic security systems designed by the Chozo. However, the Chozo are said to have traveled to Tallon IV to eschew technology and return to a simpler way of life, suggesting that the Eyons are bio-engineered, much like the Cyrlic trees found on Tallon IV. The Eyon's organic appearance supports this theory.

In appearance, Eyons resembles gigantic eyeballs. They are largely tan-colored, have little to no coloring in their iris, and have a vertical pupil like that of a reptile or a cat. They seem to have some sort of root system that attaches them to surfaces. Various carvings very similar in appearance to Eyons appear on some walls of the Ruins. It is unknown if these are "inactive" Eyons or simply creations made in their likeness.

The Eyon Tunnel room in the ruins is named after this creature. In addition to that room, other rooms containing Eyons include the Watery Hall and Energy Core Access.

In Metroid Prime 2: Echoes, mechanoids known as Corrupted Sentreyes have an identical role to the Eyons. 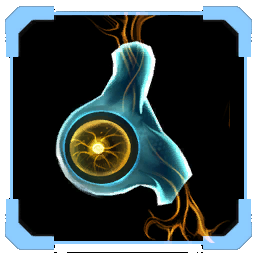 Immobile organisms entirely composed of ocular tissue.​ Capable of launching sustained energy beams when active,​ the Eyon is sensitive to light and will close shut if a bright flash ignites nearby. 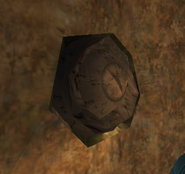 A fossilized Eyon.
Add a photo to this gallery
Retrieved from "https://metroid.fandom.com/wiki/Eyon?oldid=266038"
Community content is available under CC-BY-SA unless otherwise noted.