Fake acid (フェイク有毒液?)[1] and fake lava[2] (フェイク溶岩?)[3] (also known as false lava[4]) are related substances that act as obstacles in in Metroid and Metroid: Zero Mission.

When viewed from above, fake acid and lava appear identical to the real substances. However, if Samus makes contact with fake acid or lava, she will simply fall through and will not take any damage from the seemingly-dangerous liquids. In the remake, the fake acid and lava will vanish when Samus touches it.

The exact nature of fake acid and lava is inconsistent. Victory Techniques for Metroid shows the liquid splashing when Samus falls in it, suggesting that it has some physical properties, and Samus is able to pass through because of a pitfall in the floor. Conversely, Zero Mission depicts the fake acid and lava as illusions.[5][6][7]

Fake acid and lava are often used to hide secret passageways, such as a shaft in Corridor No. 4 that leads to the Ice Beam in Metroid. Since it appears indistinguishable from the real hazard, there are often subtle context clues that help identify the illusion, such as a bridge of breakable blocks directly above the liquid or an enemy harmlessly passing through the liquid.

"Even if you go into the lava here, you won't take any damage."

013 FALSE FLOOR (pg. 131)
"When you reach the left side of the lair, you'll see what appears to be a shallow pool of hazardous liquid. You'll discover that it isn't shallow or hazardous when you drop into the shaft and continue to drop long after you've passed the area in question."

188 LOWER LAVA FAKEOUT (pg. 71)
"When you reach the end of the middle corridor, shoot or bomb through a block in the bridge to gain access to what appears to be a lava pit. After you dive into the red liquid, you'll discover that the lava was an illusion." 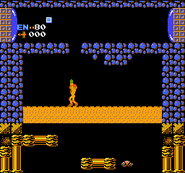 Samus standing on a solid portion of fake acid 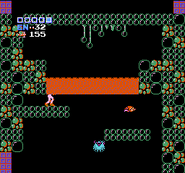 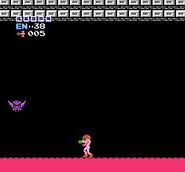