The Family Computer Disk System (ファミリーコンピュータ ディスクシステム, Famirī Konpyūta Disuku Shisutemu?, sometimes abbreviated as the Famicom Disk System, Disk System, or simply FDS) was released on February 21, 1986 by Nintendo as a peripheral for the Family Computer (or Famicom) console in Japan. It was a unit that used proprietary floppy disks (called "disk cards") for data storage. It was announced, but never released, for the North American Nintendo Entertainment System. Through its entire production span, 1986-2003, 4.5 million units were sold.

The device was connected to the Famicom deck by plugging a modified cartridge known as the RAM Adapter into the system's cartridge port, which attached via a supplied cable to the disk drive. The RAM adapter contained 32 kilobytes of RAM for temporary program storage, 8 kilobytes of RAM for tile and sprite data storage, and an ASIC known as the 2C33. The ASIC acted as a disk controller for the floppy drive, and also included additional sound hardware featuring primitive wavetable synthesis and FM synthesis capabilities. The disk cards used were double-sided, with a total capacity of 896 kilobits or 112 kilobytes per disk. Many games spanned both sides of a disk, requiring the user to switch sides at some point during gameplay. A few games used two full disks (four sides). The Disk System was capable of running on six C-cell batteries or the supplied AC adapter. Batteries would usually last 5 months on daily game play. The battery option was included due to the likelihood of a standard set of AC plugs already being occupied by a Famicom and a television.

Metroid was released for the Famicom in 1986, as it was for the Nintendo Entertainment System. The NES and Famicom versions differ in many ways. 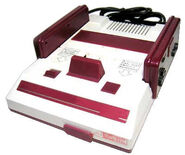 The Disk System peripheral by itself.

Nintendo 3DS Virtual Console HOME Menu icon, depicting the Famicom with the Disk System peripheral and a TV set displaying the Metroid title screen.
Add a photo to this gallery

Retrieved from "https://metroid.fandom.com/wiki/Family_Computer_Disk_System?oldid=274884"
Community content is available under CC-BY-SA unless otherwise noted.