Hall of the Golems

Fargul Hatchers give birth to Fargul Wasps, tiny creatures that attack any threats nearby within second of birth. The Fargul Hatcher uses them to defend itself. The Hatcher is native to Bryyo, and is vulnerable to attacks on its internal organ clusters. The Hatcher can be damaged also by the Screw Attack. Fargul Hatchers are very rare, and have only been observed in the Hall of the Golems.

The Fargul Hatcher is similar looking to a pelican crossed with a crocodile. It is thought to be a reptillian, as most of the creatures adapted to Bryyo's habitat are reptillian. It has a very large jaw through which it births its offspring, the Fargul Wasps. It does not appear to have eyes but it is able to detect movement. It has only three limbs which give it a slow gait. This flaw allows Samus to maneuver around it and attack its vulnerable organ cluster which are the only areas on its body not protected by its armor. 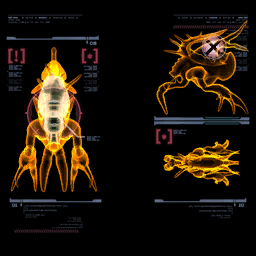 Within the Fargul Hatcher's maw is an organ cluster that is vulnerable to attack, but only when exposed. Fargul Hatchers are capable of giving birth to dozens of young in a matter of moments. These offspring will immediately swarm in on any nearby attacker. Their skin is incredibly resilient and will deflect most weapon fire.

Retrieved from "https://metroid.fandom.com/wiki/Fargul_Hatcher?oldid=269868"
Community content is available under CC-BY-SA unless otherwise noted.