Mawkin Chozo architecture
Ferenia (フェーレニア?) is an area on ZDR, which appears in Metroid Dread.

Ferenia was once an ancient Chozo sanctuary used by the Mawkin tribe in their ceremonies and rituals. Unlike other areas of ZDR, Ferenia consists largely of buildings rather than the natural environment, decorated by ornate Chozo statues, banners bearing the Mawkin emblem, and frescos similar to ancient Egyptian artwork. However, the buildings have been abandoned and left in ruin since the X Parasite outbreak.

Samus Aran goes back and forth through this area and others as she explores the planet. She meets Quiet Robe here after reaching the area through an Elevator from Dairon. However, he is assassinated shortly afterward by a Robot Chozo Soldier. This initial visit is rather brief; most of the area is only explored by her after she takes the Shuttle to it from Ghavoran.

After the X Parasites are released from Elun, they use Ferenia as their hive. One tower in the east has become infested with X-infected Quetzoas, including an especially powerful specimen called Escue. Another X discovers Quiet Robe's corpse and reanimates it.

Ferenia contains one E.M.M.I. Zone, patrolled by E.M.M.I.-06WB. This zone is partially flooded with water, making it difficult to navigate without the Gravity Suit. Although E.M.M.I.-06WB is disabled by Quiet Robe during Samus's first encounter, it is later reactivated by the X possessing his corpse. The Wave Beam is acquired after Samus destroys the E.M.M.I. and its Central Unit. Samus also acquires the Space Jump by exploring the area, and claims the Storm Missile by absorbing Escue's Core-X.

Several rooms with extreme cold are present in Ferenia, which can only be safely explored after Samus acquires the Gravity Suit. Samus returns to Ferenia through an Elevator from Hanubia while ADAM claims to be searching for Raven Beak's current location, unless she already has defeated E.M.M.I.-06WB before that briefing in Hanubia, in which case she can proceed directly to the Hanubia E.M.M.I. Zone.

Ferenia
"The ancient ruins found here indicate this area was once a sanctuary used in Chozo rituals."

~Transmission from the Dev Team~
"Constructed objects and the natural world co-exist in the other areas, whereas the inside of Ferenia contains mostly buildings left behind by Chozo civilization.

What will Samus find among the ruins of this sanctuary? We don’t want to say too much—but know that Samus will go back and forth between this area and others throughout ZDR to continue her explorations."

"This area, Ferenia, appears to have been a sanctuary. The Mawkin conducted ceremonies and rituals here. Now it all lies in ruin.

It was likely destroyed in the chaos following the X's arrival. That would match what Quiet Robe said.

They have turned it into a hive. I have also detected the presence of an unusually powerful X."

The interior of a ruined room.

The Zebesian fresco as seen in-game. 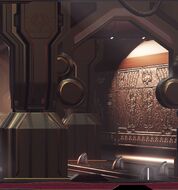 A room infested by Escue.

An extremely cold room of Ferenia with a hologram of a spaceship, seemingly the one that transported the E.M.M.I. to ZDR.