Wikitroid
Register
Don't have an account?
Sign In
Advertisement
in: Pages in the real-life POV, Pages in need of images, Toys

Figma is a Japanese action figure line produced by Good Smile Company, which has released three figures based on Samus Aran. Other Samus figures have been produced by First 4 Figures, Yujin, JoyRide Studios and Jakks Pacific. Samus also has three amiibo.

A figure of the Varia Suit as it appears in Metroid: Other M was released in conjunction with Max Factory's other Zero Suit Samus statue (with a Metroid). An action figure of the same Zero Suit model previously released as a statue was teased at Winter Wonder Festival 2014. [1] A prototype version of the figure was finally shown at Winter Wonder Festival 2016.[2] It was finally released in early 2017. The figures are the most elaborate of the produced Samus figures to date as it features a multitude of accessories. Samus' left hand is interchangeable and can be a clenched fist, relaxed hand, giving a thumbs up and with the fingers spread. The Morph Ball, a posing stand, Arm Cannon tip with Missiles or beams equipped and two Beam shots, a single and double shot, are other accessories. The Zero Suit figure features the Paralyzer, Adam's helmet, interchangable hands and faces and a swappable head of the younger Samus with shorter hair and an earpiece. Both figures are very poseable.

The Varia Suit figure appears on display in "Nintendo Minute Debate - Super Metroid vs. Metroid Prime", an episode of Nintendo Minute; at one point in the episode, it gets knocked over. The Figma is also used for Samus, instead of a stopmotion clay figure, in "The Smashing Games" sketch that aired as part of Robot Chicken in 2019. The Varia Suit figure is among Masahiro Sakurai's collection of figurines, which he keeps at his office desk as a reference for character designs in the Super Smash Bros. series.[3]

A prototype version of the Zero Suit Samus figure, pictured alongside the Other M Varia Suit figure.

The painted figure on display.

At the 2016 Winter Wonder Festival, another Varia Suit figure was teased, this time based on its appearance in Metroid Prime 3: Corruption (as well as Metroid Prime 2: Echoes, Metroid Prime Hunters and Metroid Prime: Federation Force). [4] Preorders for the figure began on April 18th, 2017.[5] This figure features a Morph Ball accessory and a changable Missile hatch on the Arm Cannon. Beginning from January 12, 2018, the Figma became available at Nintendo New York for $79.99 USD + tax.[6][7]

Nintendo New York tweet
"A new Samus Aran #Metroid Prime 3: Corruption figma has landed at #NintendoNYC! Check it out next time you visit our side of the galaxy.
$79.99 +tax"[9]

A teaser for the Corruption Varia Suit figure. 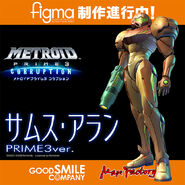 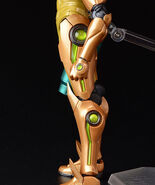 A shot of Samus's side.

A recreation of this artwork.

The Arm Cannon, with its Missile hatch extended and retracted.

At the WonHobby 35 event from February 11-13, 2022, a new Samus Aran Figma was announced, based on her Power Suit as it appears in Metroid Dread. Its release date is currently unknown.[12] It was officially unveiled at Smile Fest on August 6, 2022, along with an E.M.M.I. Figma. Neither currently has a release date. 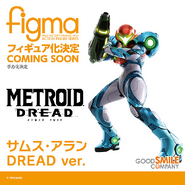 The Figmas on display at Smile Fest.[14]

A Figma based on the E.M.M.I. was announced at Smile Fest 2022, with a prototype being shown.[15] It does not currently have a release date.

The Figma on display at Smile Fest.[14]